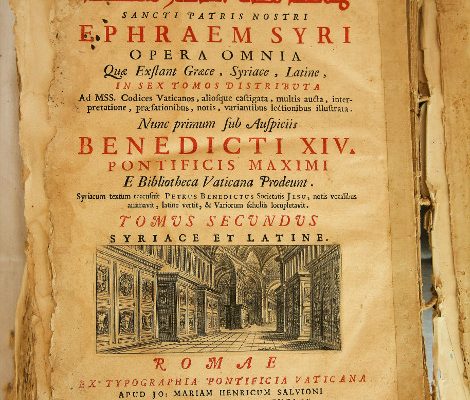 Colin Clarke, Founder/Director of the Canadian Centre for Epigraphic Documents, received the 2016 OCULA Award for Special Achievement at the OLA Super Conference in January. The award recognized Colin’s leadership in preserving ancient cultural heritage — including epigraphs which have been destroyed by the Islamic State and endangered manuscripts in India.

The Canadian Centre for Epigraphic Documents (CCED) is a project run entirely by volunteers from the information profession and graduate students from the University of Toronto Faculty of Information. Initially, the CCED worked with the largest corpus of ancient Greek inscriptions in Canada, dating from the 7th century B.C. to the 4th century A.D. These were in the form of epigraphic squeezes (three-dimensional paper-cast copies).

Currently, the CCED is working with the world’s largest collection of Iraqi Syriac and Garshuni inscriptions, dating from the 4th to 20th century A.D. These are in the form of analog and digital photographs. Many, if not most, of the original epigraphs have been destroyed by the Islamic State. The Centre has conserved, digitized, and catalogued these inscriptions, providing online open access to these texts. These epigraphs are now reaching a larger audience than ever before.

Within the first year of launching the Syriac Inscriptions Project, the CCED presented at the University of Toronto, Duke University, Cambridge University, and represented Canada at the Eighth World Syriac Conference in India. The CCED is opening new doors for information professionals.

The Centre was asked by the Director of the Saint Ephrem Ecumenical Research Institute (SEERI), Mahatma Gandhi University, to create a digital archive of all Syriac inscriptions across the southwestern Indian state of Kerala.

While doing field work there, it was noticed that Indian libraries and archives lack humidity control. The effect on manuscripts and archival materials is devastating; much is being lost. The principal of a major manuscript repository explained the problem: even if they had the technology, they would not have the money to power the machinery.

A solar-powered, humidity-controlled archival storage unit solves this problem. On returning to Canada, the CCED worked with two engineering graduates to build a proof-of-concept model, demonstrating that a solar-powered archival unit can successfully be made. The CCED is now collaborating with the solar technology firm Solar Ontario to design and build functional units featuring humidity and temperature control.

Funding is needed for parts and travel expenses to bring the initial units to India. Contributions will directly help in preserving endangered world heritage texts by using green energy.

Virtually every archive, library, and museum across the world where humidity control and energy costs are a problem would benefit from these climate-controlled units. Nothing like this has ever been created; these units will revolutionize archival standards in developing nations.

The Association of Canadian Archivists University of Toronto Student Chapter, in collaboration with the CCED, has launched a crowd-funding campaign to raise the money needed to build an initial three units for India.

This campaign will be active until April 11. After that, donations can be made through the CCED website.

We would like to issue a call for action to Canadian libraries and archives to help support our efforts to preserve the endangered texts of India.

What is being lost is not India’s heritage, it is the world’s heritage.

Together we can change the world.

Colin S. Clarke, MISt, is the Founder/Director of the Canadian Centre for Epigraphic Documents. He is the 2016 recipient of the OCULA Award for Special Achievement.