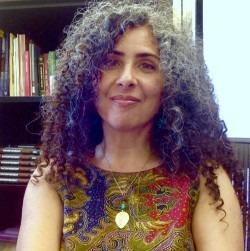 Isabel Espinal (MLIS, PhD) is a Research Services Librarian at the University of Massachusetts Amherst, where she is the librarian for Afro American Studies, Latin American, Caribbean & Latinx Studies , Native American & Indigenous Studies, Spanish & Portuguese, and Women, Gender, Sexuality Studies. She has an MLIS from UC Berkeley and a PhD from the University of Massachusetts Amherst. Previously she worked in public libraries, inlcuding the Norwalk Public Library, the Ferguson Library in Stamford Connecticut, and The New Haven Free Public Library. Her published writings include “A new vocabulary for inclusive librarianship: Applying whiteness theory to our profession,” in The Power of Language/El poder de la palabra. Ed. Lillian Castillo-Speed (2001); “Wanted: Latino librarians,” Críticas 3.5 (2003); and “A bridge to brown: The politics of Latin@ Reading,” in Technofuturos: Critical Interventions in Latina/o Studies. Eds. Nancy Raquel Mirabal and Agustín Laó-Montes (2007). Isabel was the president of REFORMA: the National Association to Promote Library Services to Latinos and the Spanish Speaking in 2013 – 2014.