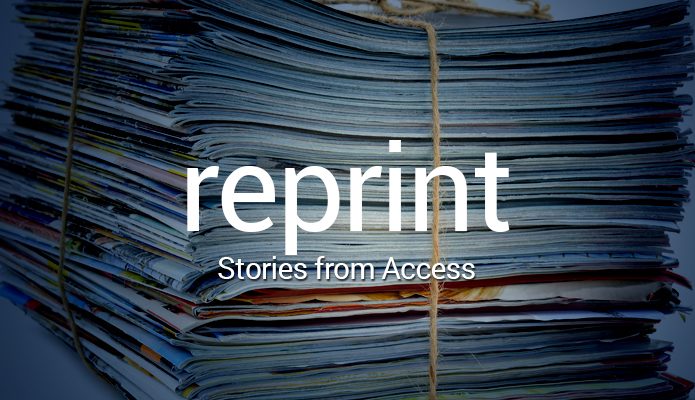 When I haul out some of my prize cookbooks for unsuspecting guests, the odds are good that at some point I will produce (Ta-Da!) the French and English language versions of the 1915 editions of the Five Roses cookbooks (Q79.3 and Q79.4 in Driver’s Culinary Landmarks).

What do people notice first about this matched pair? I think it’s impossible not to be struck by the two very different human figures on the covers. Except that both are fair-skinned females, it would be hard to imagine two more different representatives of the art and appeal of cooking.

Miss Anglo is, what, maybe eight years of age? To say that she has weight issues would be unkind. She is 1915’s idea of a healthily plump child, with big round eyes,  a button nose, dimples where her lips meet her chubby cheeks, and a big smile. Her hair is a mop of brown. She has dimples, too, where her little round hands meet her chunky little forearms. Her stout little legs are spread far enough apart to give her the sturdiness she needs to stir that very large bowl of (one supposes) dough. The grip on the spoon is a child’s full-fisted grip. The other hand holds the bowl. This is an action shot.

We do not see all of Mlle Franco. Her lower body is hidden by the title block, which serves as a kind of counter behind which she stands. She leans slightly to  her left, supported by the elegant hand that lies flat on the counter, except for the elegantly raised little finger. In her right hand she holds a book, the very cookbook  in fact on which she is pictured, and which we are now looking at, in one of those infinitely-regressing visual effects. She is not staring intently at the book, but holding it languidly away from herself, in a way that emphasizes the slimness of her wrist.

In another context a viewer might suppose that the book is not  a cookbook but a book of poetry from which Mlle Franco is about to drift into a pleasant daydream of love. Her lowered eyelids allow the viewer to appreciate her long lashes, and the tilt and turn of her head do the same for her long and beautiful neck. Her black hair is pulled up in a fashionable bun, and a little kiss curl lies in front of the delicate left ear. Her figure is slim and youthful, but there is nothing childlike about her. She is smiling. And unless my copy has a little blot on it, she has a beauty mark exactly where it should be on her left cheek.

I have said that Miss Anglo is involved in an action. That spoon she grips so avidly is certainly meant to be stirring. Mlle Franco, on the other hand, is contemplating. Perhaps she is even thinking about cooking, for in front of her on the counter are a pretty little blue bowl and a flour sifter just waiting to be put to use.

Oh, just a word about fashion. Miss Anglo is wearing a dress with a big blue and white checkerboard pattern. The single grace note is a slightly frilly high collar. The sleeves are rolled up; she may be a little bit frilly but basically she means business. Protecting the dress from spills is a white baker’s apron tied at the back with a big loopy bow. She sports slightly droopy white socks inside a pair of mud-brown Mary Janes with little blue bows. The ensemble is topped off by a big white mushroom of a chef ’s hat.

Clearly Mlle Franco shops at a store for grownups. We can see what appears to be a long-sleeved black dress, v-necked with decorative grey collar, and matching cuffs about mid forearm. But what really draws the eye is what covers her from just above the bosom to over the hips. I’m guessing it’s an apron, but it has no visible means of support. What’s more, given its length, and its frilly top and bottom, it looks way more like lingerie than cooking gear, way more bedroom than kitchen.

Like its central figure’s shoes, the cover of the English language cookbook is mud brown. The complete text is “Five Roses Cook Book” at the top, and “Bread Pastry Etc.” at the bottom. The font is a rounded joined script, suggestive perhaps of a good girl’s handwriting, in black (with a white and black outline), blue (black outline) and orange (black outline). The effect is direct and simple. What would we call the style? Homely, perhaps, in the best and worst senses of that word.

The cover of La Cuisiniere Five Roses is rimmed in light blue. The lady is backgrounded by lime green, with red roses floating around her (or perhaps on the wallpaper?). Above her head sits the phrase “Mille et une recettes eprovees” in black small capitals, very modern, san serif. Below the brown line of her counter top, against a black background, is the phrase La Cuisiniere (blue) Five Roses (red) Pour Pain et Patisserie—blue again, and again with decorative dots and a closing squiggle. The print style announces itself as very cool and au courant.

The illustrations inside the two texts are identical (and perhaps slightly closer in their homely tone to the English-language cover); the same recipes are presented, though of course in different languages. The only significant differences are in the covers.

When I first saw these covers side by side I was overwhelmed. Here. I thought, is the Canadian Story summed up in one double image. Canada is essentially one thing, but it is wrapped in two incredibly diverse cultures: a beautiful, sexy, chic French culture and a dowdy, unsophisticated, not really grownup Anglo culture.

The more I have reflected on the matter, the more insubstantial my first easy conclusion has appeared to be. Yes, it is obvious that the cover artists were appealing to two very different sensibilities. The English-language vision is plain and practical, down to earth, offering a sentimentalized image of childhood. The French-language cover presents an image of youthful femininity and beauty and glamour. Its central figure is a dreamer and a romantic.

As an aging male Anglo-Canadian, I am almost certainly the wrong person to pass judgment on the meanings of these two disparate visions. But at the very least it might be argued that Mlle Franco is less a cook’s vision of herself than a man’s vision of the person he would most like to find himself next  to in the kitchen. It is perhaps less a culture’s self-expression than one commercial artist’s eroticized stereotype of the French female. And that little girl in the blue checked dress cannot quite stand for English Canada, even if to pretend she does appeals to our own sense of irony or self deprecation.

But we will have to be content with what we have: two covers that present two utterly disparate worlds. And even if there isn’t enough here on which to found a theory of Canada, there is more than enough to allow our imaginations some room to play.

Gary Draper has been a book reviewer and an editor, a librarian, and a university professor of English. His interest in books, and Canadian history, and anything to do with food has also made him an avid collector of Canadian cookbooks. He can be reached at dgdraper [at] uwaterloo.ca.

Editor’s Note: Tale of Two Cookbooks was originally published in the Fall 2012 issue of Access. Reprint is a special column of Open Shelf that re-issues some of the more memorable articles from Access.