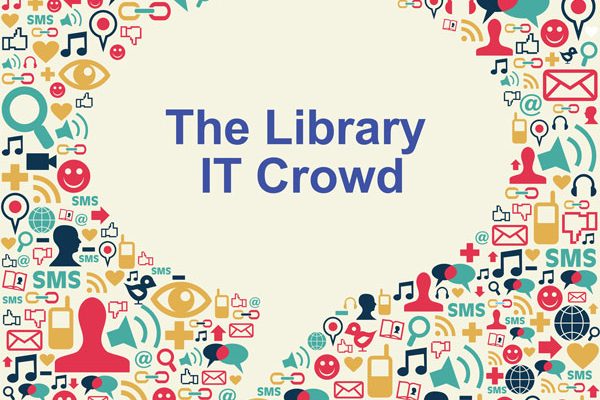 Welcome to The Library IT Crowd – a new column brought to you by the Ontario Library and Information Technology Association (OLITA). We want to showcase some of the great librarians and library workers who are currently working with technology, get to know them, and share their experiences! We hope we are able to inspire you, and shed some light onto what goes on behind the scenes with library tech workers!

Your name: David Fiander
Your title: Web Services Librarian
Where do you work: University of Western Ontario

Tell me a little bit about your role. What do you do at your library?

I’m responsible for oversite of the Western Libraries website as a whole. I set policy, plan user testing, and work with the technical staff to implement changes. I also oversee our OpenURL resolver and work with Technical Services staff, who handle the day-to-day holdings maintenance for it, and am a part of the team who maintains our discovery layer, Serials Solutions Summon.

I have a little bit to do with many of our online systems, and am often the one who has to step in when multiple systems don’t talk to each other properly.

Finally, I coordinate the library’s “feedback team”, who are responsible for providing email support for our users. This group mostly deals with electronic access issues, but it handles anything that comes in, including referring reference questions and circulation issues.

Is what you are currently doing different from what you initially envisioned when you applied for this job? If so, how?

A bit. The job was originally mostly website related. But that part has shrunk, relatively, as other technology aspects have been added. I spend much more time now dealing with most of the other systems that we use than I do with just the library’s website.

Tell me a bit about your background. What made you interested in libraries? In technology?

I was a Unix computer programmer for twelve years before I became a librarian, which sort of happened by accident. When I switched careers, I was initially a normal sort of reference and collections librarian for computer science, engineering, and mathematics. My first move into the library technology side of things was when Scholars Portal decided to implement a consortial version of the SFX OpenURL linking software. Because of my unique background within Western Libraries, I was asked to join the implementation team from Western. After that, it just grew. Finally, Western created the position of Web Services Librarian, for which I was the successful candidate.

What projects over the past year are you most proud of?

Last summer was very busy for me, with several projects all going live at the same time. Over the course of July and August last summer, Western Libraries:

Have you had a project that has failed miserably in the past year? If so, tell us about it!

What upcoming projects do you have on the horizon?

I’m part of a team that’s looking at adding floor plans for Western Libraries six branches into the “Google Maps Indoors” project. I’m also working with a small group to do user testing of new, more descriptive, names for the locations that we use in the library catalogue, to see if they help users find material faster.

I’m leading a small group who are developing library staff forum focused on ebook usability issues and patron privacy, that we’re hoping to host in June or July.

Things tend to move relatively fast in my position. I often end up getting pulled into new projects on short notice to provide the tech perspective and make suggestions about user testing. This makes it hard to foresee what I’m going to be working on next.

Sarah Macintyre has been working in libraries for over 5 years, and has been at St. Thomas Public Library for half that time. In her position, Systems and Support Services Librarian, she has overseen many new digital initiatives, including the launch of the Creators’ Community services. She can be reached at smacintyre [at] stthomaspubliclibrary.ca.