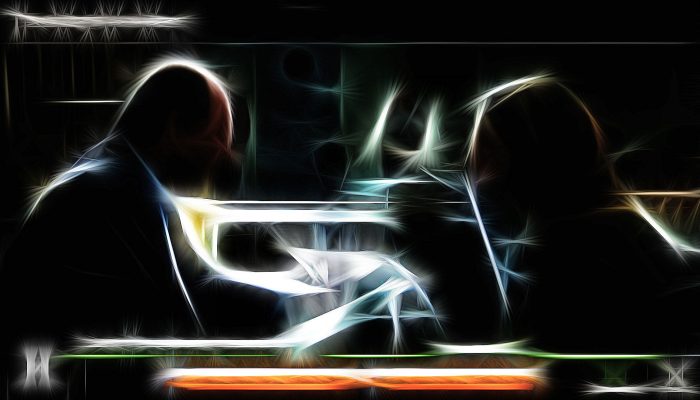 There is a duality to the process of applying and interviewing for any job. The interviewers are looking for a candidate that fulfils their institution’s philosophy  and  need for specific skills, while interviewees seek  positions where they can feel comfortable accomplished. These aspects are heightened when specialization and extenuating circumstances are present, as happened in our respective interviews for positions in academic libraries. In one case, the hiring process had been belabored on the employer’s end; in the other case, successful candidacy would necessitate moving far from home.

In both cases, the institutions wanted  candidates who  could connect with and assist the student body. Aside from  specific required competencies (intensive reference work in one case, and working with faculty to arrange reserve materials in the other), both facilities were seeking someone who could establish a rapport with students, mesh with the existing library staff, and make the library a more inviting place. As much as our interviewers were ensuring we offered  the perfect balance between technical skill and customer service, they were also trying to determine if we had the personal dispositions they needed.

There were obstacles to this all around. Unbeknownst to Melanie, the  library  had been undertaking a  search unsuccessfully for months. It had interviewed numerous candidates before she walked into the interview room. In the other case, Michael was looking for more than just a job;  he was looking for a community. He needed to know that  he would be able to reconstruct a viable, social, happy life in a new city. In both circumstances, we needed to determine, beyond the merits of the position, if the interviewers were answering our questions genuinely.

Both interviews had their challenges. One interview was traditional, though plagued by scheduling mix-ups, necessitating multiple emails to clarify and arrange. The other was conducted over Skype, which made scheduling the interview easier, but the digital distance erected new barriers. The unspoken human element gained from sitting in a room with several other people was diluted; body language cues were missed when staring at a screen; digitized sound was  more easily garbled; and the seemingly inevitable connection error created an entirely new form of stress. In both cases, under the layers of anxiety, self-aggrandizement, modesty and professionalism that we cloak ourselves in when trying to make a good first impression, was the intimidation factor.

Yet, whether in person or on  a screen, with four strangers turned in utter judgement of our skills and personage, we realized there was no reason to be nervous. We had done our due diligence. We were confident  in being the perfect person to work with  them. It was our responsibility to convince them of that fact more than our cold, fact-ridden resumes could.

Simultaneously, we needed to determine if they were the right fit for us. Creating a relaxed dialogue with every member of the committee helped a great deal in figuring that out. The ease with which we conversed helped to establish a framework that informed the relationships we’ve developed since taking our respective positions.

Michael R. Clark works in Reference and Promotions at Lambton College’s Library Resource Centre, in Sarnia. He can be reached at Michael.Clark[at]lambtoncollege.ca

Melanie Ross is a Reserves & User Services Associate at Wilfrid Laurier University Library in Waterloo, Ontario. She can be reached at mross[at]wlu.ca