Libraries in Society (Clive Bingley, 1978) was published in the year that my career in public libraries began. In this reader, edited by David Gerard, librarians from the UK and America look ahead and give their predictions – and aspirations – for the future. Some of them see libraries as the product of a humanist culture, while others view them as the manipulated tool of a minority who use them to perpetuate hegemony and legitimise their actions. I certainly lean towards this latter school of thought.

The premise of Libraries in Society was that the public library had become subject to the attentions of scientists, sociologists and salesmen, and under the burden of political pressures, diverse ideologies and conflicting interests the basic purposes of the library were apt to be overlooked. So the contributors to this book suggested what these purposes might be and they ranged from the Traditional (7) through the Community Led (2) to more Needs Based (5) approaches.

I was very interested in the authors who were advocating Needs Based library services, including Len Dawes (“Libraries, culture and blacks”) who observed that:

“As the self-esteem of the librarian heightens, his esteem of the readers lessens proportionately. The more noticeable aspects of the library reality soon follow – the bureaucratic librarian, the hushed atmosphere and the status-management props like desks, fines and red tape.”

Public libraries have changed very little since this article was written. There has been some superficial change – most noticeably the increased use of information technology – but there has been no fundamental change to public library strategies, structures, systems or cultures.

To take a very simple, but hugely symbolic, example of this inertia, public libraries still have a very prominent ‘desk culture.’ 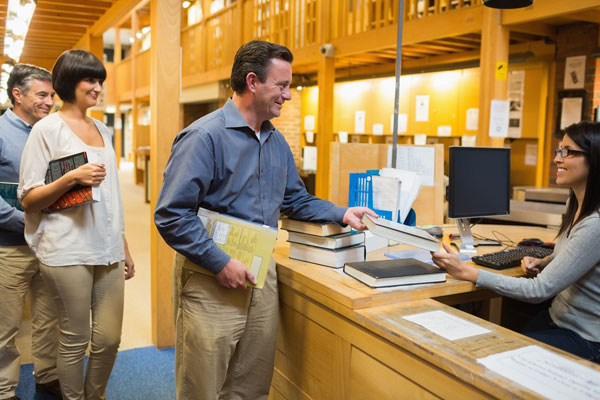 Librarians equate desks with service, as if service is not possible or as good without a desk. The suggestion is that a public library without a desk is not a library. So should the library be called the Public Desk? But it is the librarian that meets community needs, not the desk; service can be provided that is just as good, if not better, without desks. To achieve this it is necessary to re-engineer how libraries operate and to remove all the barriers and processes which make a desk necessary.

At the moment the public library cannot function without desks. The public library operating model is designed around the desk.  Librarians need to be weaned off this desk dependency. It is a damaging addiction. For example, desks are needed to manage exceptions; but if the exceptions are removed then there is no need for desks.

The biggest and best reason for removing desks is the amount of staff capacity that this can release. As Mary Lee Bundy (“Urban information and public libraries: a design for service”) observed in 1978, what is required is “a shift in the rigid rule structure which now gives library staff only very limited freedom to carry out his responsibilities. Released from punishing routines and clock punching, they can visit in their communities, attend meetings, work with groups, and take the time with the individual library inquirer which his question or interest requires.’”

The removal of desks, along with the implementation of RFID self-check systems, creates the opportunity to redeploy library staff from labor-intensive, low return activities like managing and maintaining and processing books to high-value, high-return work, like more personal visits to prepare families for their children’s success in school or time to connect face-to-face with local neighborhood schools.

Some libraries are making this happen. At the new Halifax Central Library staff are encouraged to “step out from behind the desk and have conversations.”  Leaving the desk enables the Librarian to build relationships with patrons. Active roving has been identified as a key “visibility and natural surveillance” factor in Calgary Public Library. Leaving the desk creates a safer environment for the librarian and patrons.

Desks are a highly visible symbol of Traditional public library culture. The removal of desks indicates a shift towards more Community-Led and Needs Based approaches.