“Beware of false knowledge; it is more dangerous than ignorance” – George Bernard Shaw

Given all the fuss that has been made about fake news, since America elected a new president last November, you would think that Donald Trump invented the concept. But fake news has in fact been around for a long time and certainly predates the internet. Like any term that is over used it soon starts to lose its potency. So what is fake news? And what is real news? And how can we tell the difference?

One aspect of this debate which has concerned me is the notion that ‘mainstream media’ can be relied upon to give us real news. In other words we can trust agencies and institutions such as the BBC, CBC, NBC, The Guardian, The New York Times and the Globe and Mail. As my mother used to tell me, “if it’s in the newspapers it must be true.” But is it?

The mainstream media is a tool of capitalist propaganda which has a vested interest in maintaining the status quo. This is how it works. The economic base of capitalism determines the ideological superstructure. The media plays a major part in shaping and reinforcing the dominant ideology. So while much of what we read in the mainstream media may be factually accurate, it is selected and presented in a way to meet the needs of a predetermined agenda. 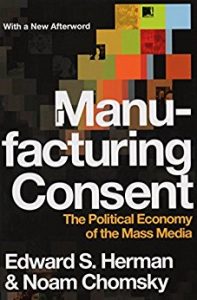 This is what Herman and Chomsky call Manufacturing consent: The political economy of the mass media. The purpose of the mass media is to mobilize support for the special interests that dominate the state and private activity. The media is not free, objective and unbiased. Those with economic and political power are able to fix the premises of discourse, to decide what the general public is allowed to see, hear, and think about, and to ‘manage’ public opinion by regular propaganda campaigns.

Most biased choices in the media arise from the pre-selection of right-thinking people, internalized preconceptions, and the adaptation of personnel to the constraints of ownership, organization, market, and political power. Censorship is largely self censorship, by reporters and commentators who adjust to the realities of source and media organizational requirements, and by people at higher levels within media organizations who are chosen to implement, and have usually internalized, the constraints imposed by proprietary and other market and governmental sources of power.

This may sound like a crazy conspiracy theory but Herman and Chomsky reached their conclusions after many years of study of the working of the media. And the term ‘manufacture of consent’ was first used by Walter Lippmann, writing in the 1920’s, when he claimed that propaganda had already become ‘a regular organ of popular government’ and was steadily increasing in sophistication and importance. This trend has been accelerated by a number of factors including the concentration of media ownership in fewer and fewer hands. Lippman probably couldn’t foresee a time when a few rich people could dominate the media and control the production and dissemination of news and information via print, radio, TV, cinema, internet and social media.

Fake news can be countered with real facts. But when the media provides some facts about an issue this proves absolutely nothing about the adequacy or accuracy of that coverage. The mass media do in fact suppress a great deal. But even more important is the attention given to a fact – its placement, tone, and repetitions, the framework of analysis in which it is presented, and the related facts that accompany it and give it meaning.

The pattern of campaigns and suppressions, of shading and emphasis, and of selection of context, premises, and general agenda, is highly functional for established power and responsive to the needs of the government and major power groups. Who can forget the ‘dossier’ claiming that Iraq had weapons of mass destruction which were primed for launch within a 45 minute time frame? This “dossier,” which led to the invasion of a sovereign state, the destruction of its infrastructure, and the growth of world-wide terrorism, was in fact taken from a student essay. Thousands of lives have been lost as a result of this ‘fact’ being placed in an official report, and then acted upon, with disastrous consequences.

So, the next time you hear the phrase “fake news” being thrown around, remember that the ‘social purpose’ of the media is to inculcate and defend the economic, social and political agenda of privileged groups that dominate the domestic society and the state. Before you direct patrons to “reliable’” media such as the CBC and the Globe and Mail be mindful that they are responsible for the selection of topics, distribution of concerns, framing of issues, filtering of information, emphasis and tone, and for keeping the debate within the bounds of acceptable relations.

Be aware also that the public library is part of this problem. As agencies of social control they are effective and powerful ideological institutions that carry out a system-supportive propaganda function by reliance on market forces, internalized assumptions, and self-censorship.

To become part of the solution public libraries must enable the organization and self-education of groups in the community and workplace, and their networking and activism, and facilitate the democratisation of our social life and meaningful social change.

The timing of the UK’s first white paper for culture in more than 50 years,…

Someone will have to pay for all the government money being used to get us through the COVID-19 crisis. This will usher in a newer, longer and deeper era of austerity and a new understanding of what defines a “model public library.”
Poll