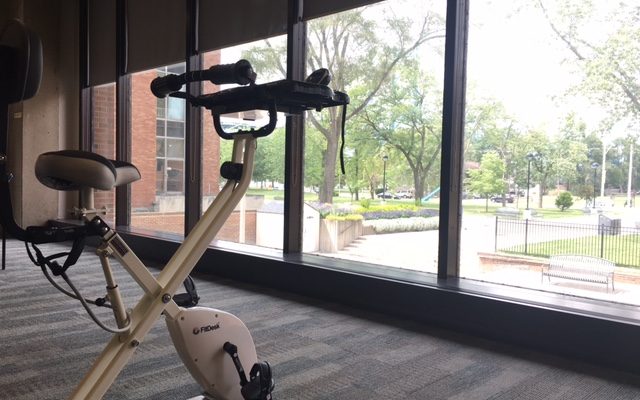 By Helen Power and Sharon Munro

Do you want to work and get a work-out at the same time?  Come to the Leddy Library!  Libraries have long been thought of as places for exercising the mind, but study bikes give students the option of getting a physical work-out too.

The University of Windsor’s Leddy Library was one of the first academic libraries in Canada to bring in study bikes, which are stationary bikes with desks attached.  Introduced to align with the University’s health and wellness initiatives, the study bikes have earned the Leddy Library recognition from local, national, and international news outlets.

The study bike is still a relatively new concept, but there has been recent research into the health benefits of exercising whilst studying or working.  A systematic review conducted by Torbeyns, Bailey, Bos, & Meeusen (2014) focused on the use of active workstations for individuals of all age groups.  The authors found that participants showed an improvement in their physical and mental health and that there were no negative consequences in terms of work quality or efficiency.

American Libraries Magazine (2016) published an article last year about the introduction of study bikes to campus libraries at Troy University.  Given the University of Windsor’s commitment to providing a healthy learning environment, it seemed to be an ideal fit for the Leddy Library.  So we brought the article to the attention of Pascal Calarco, our University Librarian.  He enthusiastically endorsed the idea and the decision was made to purchase three bikes like the ones at Troy University.

Sharon contacted the university dean of library services at Troy University, to find out more about the bikes and how they were working out.  He provided very helpful feedback and noted that the bikes were proving to be very popular in the campus libraries.  The Committee factored his recommendations into our planning process.

The health and safety of our library patrons is, of course, paramount.  Committee members put much thought into where the bikes should be located.  We opted for an area that would give bike riders a window view but that would also be within sight of the circulation desk.  We also ensured that there was plenty of space between and around the bikes.  Laptops and other electronic devices are limited to battery use in order to avoid any hazards with electrical cords.  The bikes operate on an honour system and we have an area where bike riders can leave their belongings.  Hand sanitizer and disinfectant wipes and paper towels are provided for patrons to wipe the seats and handlebars of the bikes.  Our custodial staff also clean the bikes at the end of each day.

Large signs are posted in the area that include information about the minimum age for using the bikes, safety tips, and body signals to pay attention to whilst cycling.  Bike users are also referred to the instruction manuals for the bikes.  Our circulation desk staff were provided with a list of emergency contacts such as library staff with CPR training; the University’s First Response Team, campus police and ambulance.  We also have a defibrillator machine at the circulation desk.

Once the study bikes were installed, we had a test period for several weeks in order to determine the feasibility of the location and to see if any changes were needed.  We planned for an official launch of the study bikes in September.  Librarians promoted the study bikes during the Fall orientation week.  The Leddy Library’s PR committee helped with promotion by making a poster about the bikes, which was distributed around campus.  Helen Power, the PR Committee chair, put out press releases to the local media, including CBC Windsor, CTV Windsor, iHeartRadio, and the Windsor Star, encouraging them to come out to cover the official launch.  We received positive news coverage and the study bikes were also picked up by national library media outlets.  The authors have since received emails from librarians across the country who are interested in setting up study bikes at their libraries.

If the bikes prove to be popular, we may add to their number.  In the meantime, we’re burning rubber on more than the information highway at the Leddy Library and cycling into a healthy learning environment!

Shaffer, C. (2016, May 2). Sweating in the stacks. American Libraries Magazine.  Retrieved from https://americanlibrariesmagazine.org/2016/05/02/sweating-in-stacks/

Helen Power is an Information Services Librarian at the University of Windsor’s Leddy Library.  She can be reached at helen.power [at] uwindsor.ca.

Sharon Munro is an Information Services librarian at the Leddy Library, University of Windsor. She can be reached at smunro [at] uwindsor.ca.