Anyone who is tuned into recent grassroots actions being taken on behalf of keeping the Internet an open network, like recent protests against Bill C-51, has probably noticed the work of OpenMedia. As a librarian, I wondered who they were and whether we should be joining forces with them. I contacted David Christopher, their Communications Director, and spoke to him on the phone about what the organization is doing and why librarians should care. Our interview has been edited and paraphrased for brevity.

Todd Kyle: So what is OpenMedia?

David Christopher: We are a large community-based organization dedicated to safeguarding the possibilities of the open Internet.

TK: What are some of the issues that you advocate on?

DC: Basically it breaks down into three areas. The first is privacy. We are concerned about recent revelations about government surveillance, the actions of spy agencies, and legislation such as Bill C-51 [aka the Anti-Terrorism Act 2015]. These all create the perfect storm to undermine Canadians’ privacy rights. It’s like in the U.S., where the Patriot Act was even used to demand access to people’s library records.

The second area is copyright. We are concerned that several recent developments in laws will have an impact on people’s right to freedom of expression, of discussion, sharing, and collaboration. For example, the Trans-Pacific Partnership is seeking to extend copyright protection by 20 years.

The third is access to affordable telecommunications services. In Canada telecom is dominated by a few large companies, and we pay the highest rates for these services in the industrialized world. This especially affects low-income Canadians. Top earners can all afford home Internet access, but of the bottom 25% of income earners, only 50% have home Internet access. This cuts people off from something they need to lead their lives.

TK: Has the coalition had any success with changing public policy or awareness?

DC: Yes we have. On affordable Internet, we’ve pressured the government on cellphone costs and contracts, and we are just about to celebrate Cellphone Freedom Day because all 3-year contracts will expire and users can now choose a different provider or plan. This all happened because of the CRTC’s new Wireless Code of Conduct, and our advocacy played a large part in that. The CRTC is finally siding with consumers, and that includes their moves towards more wireless choice, having more telecom players in the market.

We’ve also raised awareness about the secret TPP negotiations. There’s a vote coming up in the U.S. that will help determine its future.

Finally, our campaign against Bill C-51 as part of the Protect our Privacy Coalition has turned into a huge one. We have about 230,000 names on a petition prior to the vote in the Senate. This bill is really worrying—under it, if you protest without a permit or whatever, you might be more scrutinized by the government. It’s important to our democracy to protect ourselves against this threat—it could permeate institutions like libraries who hold their communities together.

TK: So on that topic, why should librarians care?

DC: I think our values and the values of the library community are really in sync. Libraries play an important role in our society; in fact, high telecom fees are part of the reason people need to use libraries for Internet access. But these users also should have the same expectation of privacy as people who can afford home access.

Librarians value privacy, and so do we. Your reading history can reveal a lot about you—maybe your sexual orientation, or your political views, and we need to safeguard this. Edward Snowden showed us that if spy agencies collect small bits of data about you—like metadata—they may not say much individually but taken together they can paint a very detailed portrait of an individual.

TK: So how can we get involved?

DC: The most urgent campaign is the C-51 one. On our site stop51.ca there are tools for you to write to senators, MPs, etc. and to write to newspapers. What we’ve learned is that Liberal senators are quite open to voting against C-51 because Justin Trudeau has set them free from caucus, so they are receptive to our arguments. The Greens and the NDP oppose it too, but the government has a large majority. We’re keeping our campaign going straight through to the election in October. 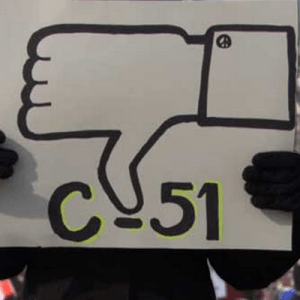 There’s also our Save the Link campaign. There’s an initiative right now in the E.U. that might undermine your right to link, where you might be liable if you link to copyrighted content. That creates a real chill factor—most of us aren’t qualified to assess copyright. Links are the foundation of the Internet. If you think of the Internet as a map, then links are the roads. Libraries do this too, they do things like suggesting books, a physical series of links just like the digital one. If this discourages people from linking then it would have profoundly negative consequences for global freedom of expression. You can see how to get involved in this at savethelink.net.

Todd Kyle is CEO of the Newmarket Public Library and writes the Policy Wonk column for Open Shelf. He blogs at nplceo.wordpress.com.

As public libraries struggle to reinvent themselves, the role many are zeroing in on is…

Painted Into a Corner: Libraries and Bill C-51

On January 30, on the heels of two domestic attacks as well as those in…

Where’s the Government Support for Broadband?