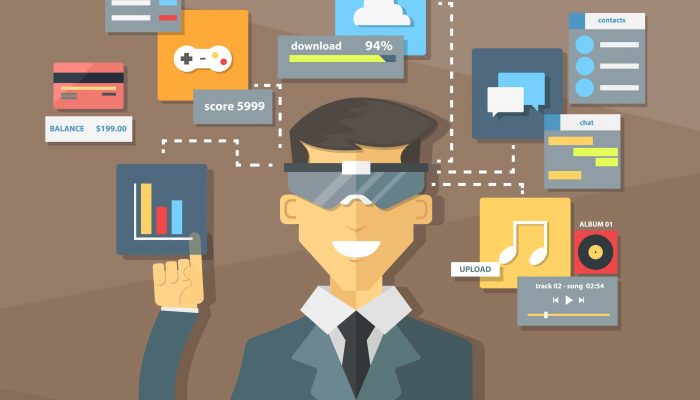 These were some of the words shared by Brock University students as they peered for the first time into a virtual world.

The popular event, which allowed students to explore a virtual book display using Oculus Rift technology, grew from a partnership between me, a new liaison librarian at Brock University, and faculty, staff, and students in the Interactive Arts and Sciences (IASC) department. In addition to creating a buzz in the library, the activity was covered in our campus newspaper, the Brock News, and won an award as “Most Innovative Event” at the OCULA Spring Dinner.

Early in my liaison appointment, I looked for opportunities to develop existing relationships and build news ones with IASC. My original idea was to work with a new IASC faculty member, Jason Hawreliak, to create a book display that highlighted the major scholarly themes faculty and students engage with in the program, such as digital humanities, computer games, digital culture, and interactive media design.

Jason agreed and the project expanded to include the technical associate in the Centre for Digital Humanities, Andrew Roth.

As the three of us brainstormed ideas for the display, new opportunities emerged. For example, we decided to try to involve first- and second-year IASC students in the project. We uploaded a 3D model of the library display case into their online course forums and invited students to share ideas and get involved. During a class visit, I again invited students to get involved.

Two students took up the opportunity. They joined us at meetings to discuss the design of the display. We included student ideas and materials into the display case. Importantly, this created an opportunity for us to help enrich the student experience at Brock.

As the design started to take shape and the pieces came together, we discussed how to promote it. We decided to launch the grand opening of the display case by using cutting edge technology that embodied the themes in the physical display case.

Andrew, the technical associate for the IASC, created a 3D representation of the physical display case and arranged images of the book covers that were in the display case to be cast against the heavenly vault in the 3D world. To view the virtual world, we used an Oculus Rift, a headset for immersing its wearers into virtual worlds.

On launch day, we wheeled a computer, large monitor, and the Oculus Rift into the library’s learning commons area, set them in front of the completed display case, and invited students to view a virtual reality version of the display.

As expected, the first few curious students were a little hesitant. But after they put on the VR headset they were enthralled. As students gathered around to try, we talked with them about the IASC department and drew their attention to the physical display case. Many students were delighted by memories conjured up when they saw the Nintendo Entertainment System.

I was surprised that the event drew such a wide range of students enrolled in Film Studies, Accounting, Kinesiology, History, Chemistry, Business, and many more programs. They were keenly interested in trying it because they had watched videos about the Oculus Rift.

The interest amongst students was so high that the learning commons manager invited us to come back a second day. When we returned at the end of the week, a line of students formed once again.

A lesson reinforced from this experience is the value of collaboration. Inviting people to be involved and integrating everyone’s ideas as far as possible is a great strategy for developing innovations.

A second lesson learned is about a role libraries can take with technologies. Giving students a chance to play around with technology can be an important step in academic inquiry. For example, a Kinesiology student who tried the Oculus Rift had been thinking about doing a master’s degree on computer games. The event gave him a chance to try the technology and ask questions of a local technical expert. Similarly, Business students tried the Oculus Rift and brainstormed about business applications of virtual reality.

Mark Weiler is a Liaison Librarian at Brock University. He can be reached at mweiler [at] brocku.ca.