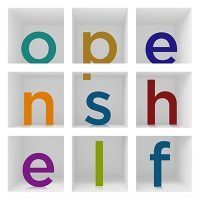 In this release we feature …. nothing new at all! It’s our first anniversary issue and to celebrate we are re-issuing some of our (i.e. my) favourites from the past year.

But first, a word or two from me. It is amazing that we are  Celebrating One Year of Open Shelf. It gives me a chance as Editor to review the journey so far and to thank some amazing people.

And now to some favourites since August 2014.

Probably the all-time favourite column in Access (the previous OLA print quarterly magazine) and now in Open Shelf is Random Library Generator, random interviews with OLA members (we are at #25 currently). The brainchild of the wonderfully inventive Robin Bergart, the column has been taken over by the equally warped Adele Georgievski. It seems appropriate to simply pick one at random to feature. So, here it is.

Political and philosophical, John Pateman is a leader with an agenda! His Open for All? column examines libraries, and particularly public libraries, from a unique and compelling perspective. A good example is The Community-Led Public Library.

Some issues are always with us, others are flash points deserving immediate attention. Bill C-51, now the Anti-Terrorism Act, is a case of both. When Todd Kyle wrote Painted Into a Corner: Libraries and Bill C-51 as part of his Policy Wonk column, the bill was moving through Parliament. He warned that this legislation was “an intrusion on intellectual freedom” and warranted attention from libraries. Now the law is being challenged in court and will likely feature in the October federal election.

Market Share is a new column and its only article so far is The Ask Girl Marketing Campaign … but what a good piece it is. We are looking forward to future instalments from Susanna Galbraith and Andrew Colgoni as they explore how libraries get their message across.

Gary Draper’s Tale of Two Cookbooks is part of our Reprint: Stories from Access column (wherein we reissue favourites from the old OLA quarterly magazine). It is the story of Canada told through the different covers of the same cookbook – one published in English, the other published in French.

Ry Moran is Director of the National Centre for Truth and Reconciliation at the University of Manitoba. The NCTR is tasked with preserving, protecting and providing access to all materials, statements and documents collected by the Truth and Reconciliation Commission which recently issued its recommendations. Jennifer Dekker’s interview with Ry Moran explores the work of the Centre and the invaluable resources in its collections. How libraries respond to the TRC recommendations will be a measure of our commitment to community development and social justice.

Open Shelf loves to publish articles by LIS students. We get fresh ideas and new perspectives, and we help students promote themselves and their emerging careers. Open Shelf also loves Twitter (@OpenShelfOLA). Let’s Give Them Something to Tweet About: Applying Best Practices at Western Libraries introduced as to Megan Sioui and Kristen Lemay. Together they provide some insights into how to make Twitter work for your library.

Open Shelf also loves to publish articles by LIS faculty and their research. The Research for Practice column coordinated by Paulette Rothbauer has brought us numerous insights into LIS scholarship including The Tech Savvy Child E-Reading: Children’s Experiences and Perceptions of E-Reading by Lynne McKechnie and Kathleen Schreurs.

And what’s a library publication without something about dogs or cats? Allison Bell’s Paws for a Study Break explores the phenomena of bringing companion animals into libraries as stress relievers for harried users. Lots of good advice … and it gives us an excuse to run a photo of an adorable dog.

In order to recover from our year 1 celebration, Open Shelf is taking a break. Our next release of new articles will be September 1st.