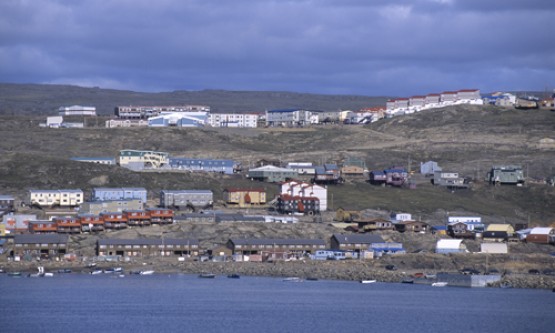 My 2014 travels through Nunavut have brought me to appreciate the symbiosis between the people and the library.

There are 11 public libraries in Nunavut mandated to be community-focused spaces that allow the Nunavummiut to read, learn and reach out to the world. Yet despite the infrastructure challenges, the Iqaluit Centennial Library appeared to have found its place in the community. In this piece, Ali Abbas Mehboob Hirji reflects on a visit to the library and its greatest resource – the people

At the outset, I must declare a very limited knowledge of the evolution of the library. However, having resided in numerous global communities, I have witnessed different libraries and my fascination with the fluidity of libraries has only grown. During my formative years in a working class suburb of Dubai, our municipality led library initiative did not resonate with our largely expatriate community. Not only were the books in other languages, the idea of quietly reading and sitting in one place simply wasn’t a fit for us.

Instead, and quite surprisingly, because of a heavy emphasis on religious training, the bookshelf in our community mosque morphed into our community library with attendees maintaining their personal, informal exchange systems and building discussion circles around various corners of the mosque quarters. I remain surprised at this – the bookshelf mobilized us into reading, thinking and interpreting texts for ourselves. By becoming our library, it silently shifted the authoritative, clerical system and allowed us a room of our own.

Today, much of this remains in Dubai and has taken on a digital character. And the ethos remains the same – the people are the library’s most influential resource and they create its meaning and impact. Indeed, modern technology and connectivity are important to today’s library. But the people who use the library shape its impact. I witnessed this ever so intimately in Iqaluit. There is a traditional sense of what a library is – but in Iqaluit I found that the library did not just go with this flow. Instead, it was slowly defining its own flow.

Iqaluit, “place of many fish”, is the territorial capital of Nunavut, teeming with rich artistic histories and practices that continuously attract research interests. After travelling through the hamlets of Rankin Inlet and Arviat, my final dive into Iqaluit was aimed at exploring the digital infrastructure in place to support local artists: travelling with fellow researchers from the Mobilizing Inuit Cultural Heritage (MICH) team, my goal was to see how broadband capacities could be scaled to support arts entrepreneurship.

To launch my understanding, it was only right to begin by visiting the Unikkaarvik Visitor Centre and gathering a sense of the community’s history. Upon approaching the centre, I unexpectedly realized that it was close to the Iqaluit Centennial Library. And, but of course, hoping to find some internet and “check-in” to the library on Swarm, I walked into the library first! And, that is right, I was “hoping to find some internet” – my Rogers “Canada-wide” data plan was not functional in Nunavut and adequately summarizes the territories connectivity woes.

Nunavut’s internet services are exclusively delivered via satellite connections. Many of you might already be familiar with the broadband issues that plague Nunavut – many hotels have a notice in each room asking guests to conserve bandwidth! Not only is the high cost of satellite technology a jarring concern, the socioeconomic issues open up a series of problems that need to be seen firsthand in order for one to understand how interwoven our lives are with connectivity. Here in Toronto, for example, connectivity is something that is just there – it is the oxygen of our digital economy. Thus, to be in a community with limited connectivity dramatically shakes our understanding of daily function.

There are 11 public libraries in Nunavut that are mandated to be community-focused spaces that allow the Nunavummiut  to read, learn and reach out to the world. Certain communities do not have libraries and an innovative “Borrower by Mail” program has been established to facilitate exchanges. Likewise, the “Inter-Library Loan Program” facilitates exchanges between libraries when required. Although many of these exchanges can take over 3 months to facilitate, thanks largely to the expensive transit costs in Nunavut, the programs are well in place. A variety of archives are held by the Arctic College and government bodies and substantial efforts are made to ensure that local culture and history remains accessible and preserved. More information can be found at the Nunavut Public Library Services. With poor bandwidth and geographical isolation, it is remarkable to see these achievements.

During my visit to the Iqaluit Centennial Library, I realized how the library cemented its place within the community.

While there was some WiFi, approximately ten computer stations and a slightly dated collection of books, the mix of genders (albeit mostly teenagers ), community notices and collection of local heritage posters and items spoke more powerfully to me. Sure, I did not spend too much time in there and I was visiting at a time when most folks were probably at school. But that time was sufficient for me to develop a reflection.

I noticed challenges, challenges met by a motivated populace. The library was open for 5 hour periods each weekday and a 4 hour period on Saturday. A few programs were specifically created for youth and children and a variety of community collections were curated within the library. I was struck the most by the observation that digital gaming, comic arts and other graphic design disciplines were promoted and the library played a central role in organizing and accommodating sessions. 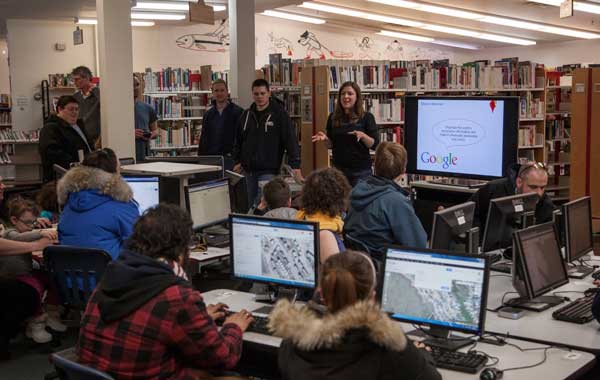 Nunavut’s Citizen Cartographers: To make sure the map of Iqaluit is as accurate as possible, Google conducted a Community Map Up at the Iqaluit Centennial Library.  Small business owners, elders, high school students and interested citizens gathered around computers and used Map Maker to add roads, trails and several points of interest to the Google Map of Iqaluit and Canada’s north. Because Map Maker supports Inuktitut, residents could use one of Nunavut’s official languages while making edits to the map.

A quick snoop of the monitors in the computer section revealed that most folks were on Facebook – it was clear to me that the library was their only resource to connect to the world and that, in every possible way, the librarians were attempting to align content with connectivity and attract the youth to the library. This was not a traditional library as I knew of it. Instead, it was a library that pushed to exist by catering to the needs of the community youth.

Is enough being done? Perhaps not. But, was it exciting to sit there and imagine where the youth could take the library? Absolutely.

And, I guess, that’s the point of this – to whom is the library being entrusted and for when?

Shortly after his travels through Nunavut in 2014, Ali became a Canadian Citizen. That journey has defined “Canadian” for him – surely, being Canadian is not about going with the flow. It is about being the flow. You can connect with Ali on twitter @abbaspeaks or LinkedIn by searching for Ali Abbas Mehboob Hirji.