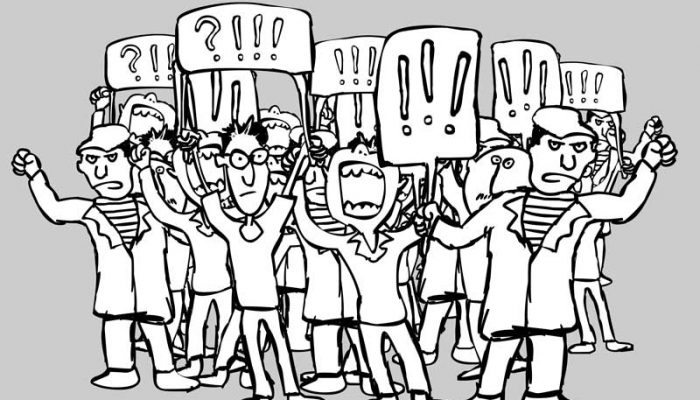 Last week up to twelve University of Guelph students staged a protest in the Library’s Learning Commons. The students entered the library at 8am on Tuesday, as soon as the doors were unlocked.

Many of the students were wearing tweed jackets with elbow patches, and some were carrying briefcases.

They linked arms and formed a ring around a bank of desktop computers.  Before library staff could call security, the students started chanting what sounded like:

“Use Your Noodle, Say NO to Google.”

Long service employee, Amelia Manuel, was one of the first staff members to witness the protest. She said it was one of the more unusual events she had seen in the library in twenty years:

“They were very respectful and actually pretty quiet,” she later told campus police. “Actually, you could barely make out what they were saying.”

After what seemed like about four minutes, the students unlinked their arms and stormed up the stairs to the sixth floor where the library stores its low-use collections. By this time, library security had been alerted and had taken the elevator up to meet them.

In what appeared to be highly planned maneuver (later confirmed by security tape), the students started pulling the library’s small remaining collection of paper Abstracts & Indexes from the shelves. This sent up clouds of dust, which temporarily blinded security, and allowed the students to make it back to the stairwell, each carrying up to two volumes each.

The students returned to the computer bank they had formerly encircled and propped up an A&I on each keyboard. Mitchell Sleeves, a recent graduate of the University of Toronto’s iSchool, and the library’s new Star Wars Outreach i-brarian, admitted that at the time he had never seen a print volume of an A&I and didn’t grasp the full significance of what was happening, only that the dusty volumes were triggering his allergies.

It was Ms Manuel who was the first to put the pieces together and realize that the students were (in their albeit makeshift way) sending a message (to whom?) that they felt cheated out of a university education by Google, Google Scholar, and the like, and wished to have some of the more traditional library search tools re-instated.

A spokesperson for the student group (who did not wish to be named) indicated that he had heard about Abstracts & Indexes in a library information session and was instantly hooked. After Googling to learn more about these historical artifacts, he discovered that they were not just a University of Guelph anomaly, but that researchers around the world had once used them to great effect.

No one from the Chief Librarian’s office could be reached for comment.