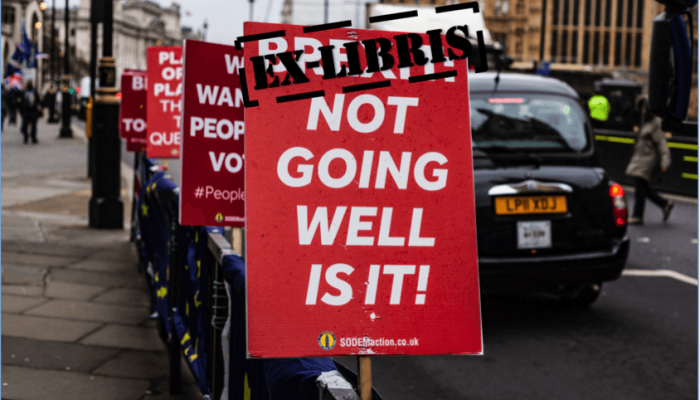 When the librarians of Ontario voted in 2016 to exit the Canadian Federation of Library Associations (CFLA), they didn’t realize what chaos and mayhem this would unleash. They assumed that the Ontario Library Association (OLA) would depart from the CFLA in an orderly and a swift fashion. When we look back at those Open Shelf headlines now—“Thank God. I’ve got my library association back”—it all seems like a bad dream.

The vote was close, with 52 percent of OLA members in favour of leaving (Ex-Libris) and 48 percent wanting to stay (Remainders). The inevitable outcome was that half of the members of the association were going to be unhappy. And now, there are some angry voices coming from the Remainders demanding a second referendum, with the bar set much higher at a two-thirds majority. They argue that no one really knew what they were voting for back in 2016. The evidence for this is that the most frequent internet searches among OLA members the day after the vote were “What is Ex-Libris?” and “What is the CFLA?” It has also been alleged by some Remainders that disinformation was spread during the referendum campaign. In the run-up to the vote, the Ex-Libris campaign claimed, for example, that the money saved from not subscribing to the CFLA would be reinvested in library collections. It has now emerged that the Ex-Libris group never intended to follow through on this promise and that the reinvestment will not happen. It was also not widely understood by Ex-Libris voters that when Article 50 (another heavily searched term after the referendum) of the OLA constitution was triggered, it would take up to two years to negotiate a way out of the CFLA. This provision was deliberately built in so that other provinces would not rush to leave the federation.

We know that both Quebec and Alberta have been following the OLA process very closely, with the aim of possibly holding their own referendums. However, having seen the fiasco in which the OLA has become mired, our western counterparts  are now backing away from this option and have a better understanding of the benefits of staying in the CFLA. There are still some niggles about the larger and richer library associations having to subsidize the smaller and poorer professional bodies, but this equalization principle was always central to the CFLA vision.

Another key driver behind the Ex-Libris vote was that library workers from other provinces were stealing the jobs of OLA members and driving down salaries. While there is no evidence of this actually happening, this narrative was a useful way to stoke up anti-CFLA sentiment. Whatever agreement the OLA hammers out with the CFLA, all provinces must fall in line. The final accord includes a controversial “backstop” clause, which will prevent a hard border going up between the OLA and its neighbouring library associations. The price for avoiding the nightmare of essential book supplies being held up at the border is that OLA remains inside the CFLA book-buying consortium. Hard-liners oppose this so-called soft Ex-Libris and say that it’s just a ploy to stay within the CFLA by another name. This proposal has already been voted down twice at the Super Conference and the OLA president (a Remainder) narrowly survived a non-confidence vote.

The OLA has until  April 1 to reach an agreement, or the association will face a potential no-deal Ex-Libris. What happens then is anybody’s guess, but contingency measures are already being taken. Library supplies are being flown into special storage facilities in case the land borders are closed. Library security staff vacation has been cancelled to prepare for potential patron unrest. All will be revealed on April 1.

The mid-career malaise of a library cat
Questions like “Why am I here?” “What are my future goals?” and “What the fluff am I doing with my life?” are all perfectly normal during your mid-career moment. Here are the top five ways that library cats can battle the mid-career blahs with cat-itude!
Disquiet, in charcoal
A relatable, library-themed, short story.
Staffless libraries: Have they been hacked, or worse, are they alive?
You may have heard that some libraries have removed staff members from the equation so automatic doors and machines can greet patrons. Artificial intelligence allows libraries to provide this staffless branches option to patrons. However, they may be causing a larger problem. We've learned that the machines in one public library may have developed a mind of their own!
793.73: Quotable creeps