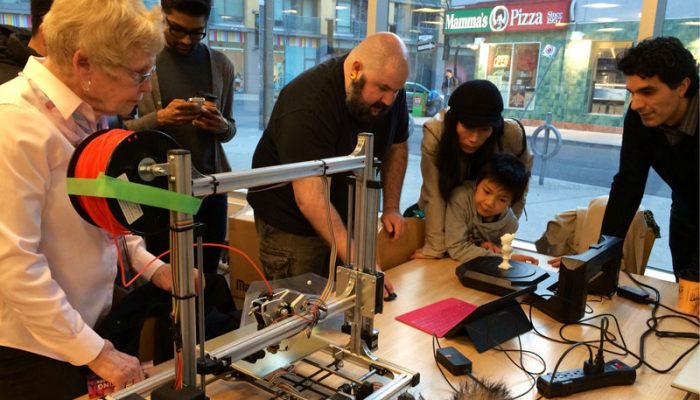 When Toronto Public Library’s (TPL) first Digital Innovation Hub opened in 2014, it brought a new opportunity for customers to get free access to high-end tech such as 3D printers, Apple computers, video and audio equipment, and professional-level design and editing software.

Two more Hubs have since opened. With more Hubs coming in the future, the library continues to monitor the landscape to assess what new and emerging technologies we can offer. For instance, staff and customers often request laser cutters and other fabrication equipment.

Here are five trends we are monitoring with interest.

Virtual reality (VR) has exploded in the mainstream. VR allows users to immerse themselves in a virtual environment using a headset. Current VR headsets include high-end devices such as Occulus Rift and HTC Vive, the mid-level priced Samsung Gear VR, and the cheap but effective cardboard viewers. Apple is rumoured to be developing a device. On the production side, 360 cameras such as the BublCam, allow users to create VR content. 360 live video streaming  is also something we’re keeping an eye on.

Gaming and entertainment will be the first to demonstrate the capabilities of VR, but the potential for VR to reshape education, communications, and social networking are also exciting.

Public libraries such as Edmonton and Innisfil have begun to offer access to VR tech. This Spring, TPL piloted an Introduction to Virtual Reality program  using cardboard viewers and we are looking to offer more VR equipment and programs this Fall.

Augmented reality (AR) is a “cousin” of VR with a key difference. In an AR experience, digital content is layered on top of real world objects – “augmenting” it – and the augmented content is usually viewed through a device such as a headset or mobile device.

Similar to VR, tech companies are investing in AR, such as Microsoft’s HoloLens headset. A developer edition  is now shipping.

We are not aware of too many examples of AR applications in a public library setting – and we’d love to know about them! – and we’re monitoring how AR is being applied in other environments (such as Royal Ontario Museum’s Ultimate Dinosaurs AR App) with interest, to help imagine how AR could be adapted into our spaces and services.

Robots, smart cars, and other “intelligent” machines are capturing the public’s attention as tangible examples of artificial intelligence (AI).

You may have heard a while back about IBM’s Watson competing and winning against humans on Jeopardy or the dark results of Microsoft’s Tay, a “female teen” AI that recently joined Twitter and was quickly taken offline after her behavior became rather colourful.

Pop culture fans often recall the doomsday Skynet scenario from the Terminator movies when they think about AI. While AI has its famous critics, such as Stephen Hawking and Elon Musk, it also has advocates, as many universities and startup companies are exploring its potential in the realm of healthcare, finance, and urban planning.

Like with augmented and virtual reality, TPL has much to learn about AI. To get our feet wet, we will host a series of talks about AI at our Digital Innovation Hub branch locations this fall.

This Spring, TPL launched our Pop-Up Learning Labs, a service that consists of three mobile equipment kits that travel to branches across the city that do not have a Digital Innovation Hub.

Each Lab stays at a branch for a month. A dedicated Pop-Up staff works with local staff to deliver technology programs such as 3D printing and 3D design. Equipment available include a 3D printer, Lego Mindstorms robotics kits, Snap Circuits, and Arduino kits.

A pop-up model offers library systems a comparatively cost-effective model to bring technology services and programs to communities that do not have convenient access to a makerspace.

TPL hopes to double the number of Pop-Up Learning Labs available in the near future.

#5. Look to the Community

One key lesson TPL learned from observing other library makerspaces and through our own experiences is that animating a makerspace is key. Our talented staff offer a diverse array of programs including 3D design, photo, video and audio editing, coding, Arduino, and robotics.

Community partnerships are also key in animating the library with new technology, expertise, and ideas. This July, TPL will once again host the Maker Festival, which is expected to attract 10,000 makers to the Reference Library. Other exciting partnerships include a hackathon in September with Open Data Institute of Toronto and Open Data Toronto, wearable tech meetups with We Are Wearables, and the Open Data Book Club monthly discussions.

Toronto is home to a vibrant maker community and TPL has greatly benefited from their spirit of collaboration. Likewise, other libraries can look into their community. There will undoubtedly be wonderful makers who are open to collaboration. Happy making!

Ab. Velasco (@ab81) is a Project Leader at Toronto Public Library’s Digital Innovation team. He enjoys organizing technology-based programs and partnerships and he is excited about the potential of virtual reality.