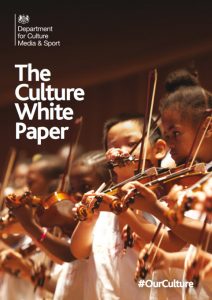 The timing of the UK’s first white paper for culture in more than 50 years, and only the second ever published, is curious to say the very least. At a time when hundreds of public libraries have been closed and thousands of library workers have been laid off, the Department of Culture Media and Sport has published its long awaited Culture White Paper. To give you an idea of the scale of the public sector cuts in the UK, the public library service that I was Chief Librarian of before coming to Canada has seen the number of its directly-run libraries reduced from 48 to 15. The other 33 libraries have either been closed or moved into the voluntary sector. This has been done in the name of post recession austerity, but the real reason is a neo-liberal political agenda which seeks to reduce and ultimately eliminate the public sector via cuts, outsourcing and privatization.

As Goebbels’s once famously observed “when I hear the word “culture” I reach for my gun”, and I cannot help thinking that this is the mindset of Her Majesty’s Government. Orwell would have applauded their use of Newspeak as on the one hand they continue to close libraries and on the other hand they claim that the Culture White Paper is “the latest contribution to our approach to public support for art and culture”. To quote Orwell again, “Ignorance is Strength”. So what does the UK government’s 1984-style vision for culture look like, exactly? It’s all about value of course: the intrinsic value (art for art’s sake); the social value (improving education and health outcomes); and the economic value (contributing to economic growth and job creation). But in reality it’s all about the economic value because this Government knows the price of everything and the value of nothing.

The public library presents an interesting challenge to the neo-liberal mindset. Here is an organization which uses public money to buy collective resources which are shared and recycled by the community. That sounds like socialism to me. But the economic base is capitalism and this determines the superstructure which includes culture and libraries. So the social model of public libraries is being reshaped to fit the economic base. And this will be achieved by what the Culture White Paper euphemistically calls “cultural investment, resilience and reform”. This objective encompasses a number of sub-themes, the first of which is, “the government will continue to invest in our growing cultural sectors”. In the case of public libraries a new four million pound investment fund has been created which libraries can bid into. But this goes nowhere near to replacing the twenty four million pounds which has already been stripped out of public library budgets to date – and there are many more cuts in the pipeline.

The second sub-theme is “government support to help cultural organizations develop more mixed funding models makes a demonstrable difference”. By mixed funding models they mean replacing year on year government funding with “revenue generation from new social investment and other alternative finance models that are still relatively untapped by the cultural sectors”. This includes exploring the use of Social Impact Bonds, which is a financial mechanism in which investors pay for a set of interventions to improve a social outcome that is of social and/or financial interest to a government commissioner. If the social outcome improves, the government commissioner repays the investors for their initial investment plus a return for the financial risks they took. If the social outcomes are not achieved, the investors stand to lose their investment.

This sounds like a return to the time of charity and philanthropy, which is better known these days as crowd funding and the National Lottery. So the future of culture in the UK will depend on a few rich people dipping into their pockets, and the workers continuing to gamble their low pay in the hope of hitting the lottery jackpot. That does not seem very sensible or sustainable to me.

The third sub-theme is, “we will support public bodies to meet the objectives set out in this white paper”, which can be interpreted as meaning do as we say and you may get a few crumbs from the government table. There will be “tailored reviews” of individual public bodies. The purpose of these reviews is to “challenge the continuing need for individual public bodies, in relation to both their functions and their form, and to review the control and governance arrangements”. In the case of public libraries, a Task Force has been established to take this work forward. This is the latest in a long line of task forces and reports, none of which have led to any improvement or investment in the service.

So what has all this got to do with Canada? The UK is in a mess because it decided to bail out a bunch of greedy reckless bankers with public money. Canada took a different route and its public libraries have weathered the economic storm. But there are some straws in the wind, most notably in Newfoundland and Labrador, but also elsewhere. The search for ‘the gravy’ may not have ended with the demise of Rob Ford. There are some siren voices emerging around the need to manage and control public spending deficits. And some are looking to how the UK government turned a financial crisis into a political opportunity to roll back the public sector.