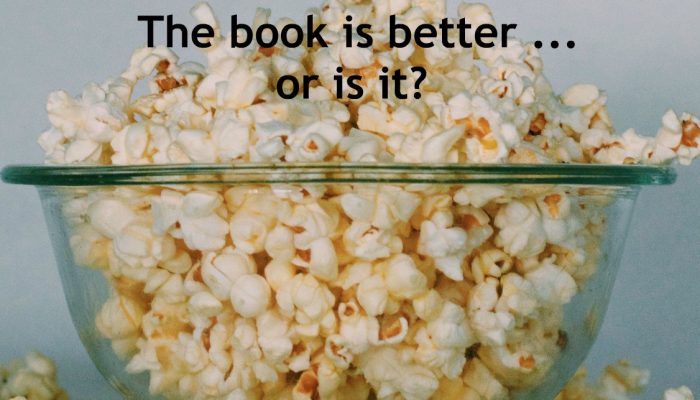 We love to compare books and their screen adaptations … plot and people, pace and perspective. Which version is better, the movie or the book?

In this limited series podcast, Trish O’Flaherty and Alana Skwarok take up the challenge of reading, watching and deciding which medium tells the story better.

Their first conversation is about Hidden Figures.  Margo Lee Shetterley (2106) has written a compelling history of the lives of African American women who, as mathematicians in the mid 20th century, played an integral role in the NASA space program. In the same year, director Theodore Melfi serves up a film adaptation that brings this story to the big screen.

“Although the movie was compelling and educational, I preferred the book because the movie inescapably condenses and elides the rich history so thoroughly researched by Margot Lee Shetterly, understandably in favour of a cohesive narrative. The film safely straddles the line between a “feel good” movie and providing snippets of the experience of being a black woman in the Jim Crow era, while the book focuses strongly on the complexities of African Americans participating in the fight and advancements of a country and a system that kept them at the bottom rung of American society. The book often gets lost in its attempt to keep a meticulous account of dates, names, ranks, and the science behind aerodynamics, but is ultimately both a fascinating account of the “computers” that propelled NASA through the space race and an honest portrait of the intersection of employment and society for African Americans in the South during the 1960s.”

“Having seen the movie Hidden Figures, I confess I had a difficult time engaging with the book of the same name. However, very soon the descriptions and details of the prejudice and struggles faced by the story’s women drew me in and images from the movie dimmed.  Author Margo Lee Shetterly brilliantly illustrates a society of racism and segregation in which very bright, irrepressible women proved themselves more than capable of excellence. Through determination and courage, they succeeded in an unfair education system and a patriarchal work place while at the same time they were raising families and balancing personal lives.  Reviews of the book were mixed as the writing does not always flow well and has been described as dry and uninviting.  The film’s strength was bringing to life the story of the space race, this untold piece of NASA’s history and the accomplishments of Dorothy, Mary and Katherine.  Together the book and the film told the unknown but powerful story of three amazing women and their contribution to the space program.  Shetterly’s story is an inspiration for young women to pursue studies and careers in STEM areas.”

Listen, consider and comment … Trish (left in photo below) and Alana (right) would like to know what you think: is the book better?

Trish O’Flaherty (BA) is a subject specialist in Research Support Services at Carleton University. In addition to supporting teaching and research in Business, Economics, Public Policy and Religion, she is an avid reader (two book clubs!) and movie-goer.

Alana Skwarok (MLIS) is a reference librarian in Research Support Services at the Carleton University Library. When not doing a master’s degree in film studies, she supports teaching and research in Film Studies in addition to reading and watching an eclectic range of movies and books.