The Safe spaces column is an attempt to explore today’s persistent socio-cultural debates in light of the alleged values of the librarian profession: intellectual freedom, equity, inclusiveness, diversity, evidence. The first topic Safe spaces attempts to parse is the current debate over cultural appropriation.

I am a fragile white person. I knew it at the 2017 iDiversity symposium, where the Countering Canada 150 seminar described a nation founded on racism. I knew it at OLA’s Super Conference, when activist and journalist Desmond Cole criticized teachers and their unions for not joining him in opposing the School Resource Officer (SRO) program, which places police officers in troubled schools. And I knew it the day I read a blog post about literary cultural appropriation that argued that a white person can say whatever nonsense they want at a conference and will still be “honoured, promoted, and protected.”

I don’t make this statement with any pride, nor with any bitterness. To admit that I am white and fragile is to acknowledge that my first reaction to such comments about race  is decidedly defensive. But to avoid defensiveness, or outrage, I need to look again at how my values as a librarian might guide me to think about these issues.

Today our society is struggling to come to terms with the lower social, economic, and political outcomes often associated with racialized groups, and in particular Black Canadians. Desmond Cole has said it best: unlike recent immigrants, established Black Canadians don’t have factors like language difficulty to explain their dismal numbers among positions of power. Working towards changing this status quo is in everybody’s interest. As librarians, we know that to be true. But what are the causes of this power imbalance, and what remedies do our professional values suggest?

“White privilege” is the cause most often put forth currently for the marginalization of racialized groups. According to this explanatory framework, white people are automatically valued most highly in our society. Certainly, this is borne out by many outcome measures, from employment to housing to political power. But as librarians, we need to be careful about rushing to assign this theory the status of a law. Unlike the unassailable maxim that all people are created equal (scientifically and legally), white privilege is only an analytic tool, albeit one that helps us understand the special attention we must give to the needs and the voices of the marginalized.

Many are uncomfortable, however, with this approach to understanding social and political relationships and librarians should validate alternative viewpoints. A friend recently told me about the impact of anti-racism training given in their workplace. Another employee, who grew up in one of the poorest neighbourhoods in one of the poorest regions in Canada, found that the training did not “lift up” the disadvantaged. Instead, she found herself being labelled as privileged and was hurt by this suggestion. Similarly, one can debate the validity of the absolutist position taken by American author Ijeoma Oluo: “If you are white in a white supremacist society, then you are a racist.”

In the context of such discussions about race, the concept of “white fragility” has become the way that many people describe the discomfort certain individuals and/or groups experience when their privilege is challenged. Certainly, this discomfort is not necessarily a wholly negative feeling because it can lead to greater empathy with other folks who may be less advantaged. As librarians, we understand that discomfort is not always a bad thing. After all, we believe that reading should challenge us so that we can move beyond the self-affirming echo chamber of our own values and experiences. We also understand the evidence of history and that, in particular, great social change often begins with difficult, even offensive, conversations.

But accusations of  “white privilege” are not always warranted. Take, for example, the case of Dalhousie University student council member Masuma Khan. Last year, the Dalhousie student council refused to participate in Canada 150 in solidarity with Indigenous peoples. Not all students agreed with this refusal and, via social media, Khan used “white privilege” to counter their criticism with the hashtag #whitefragilitycankissmyass. As librarians committed to dialogue, we need to be wary of an epithet used as a weapon. We also need to be careful not to overreact: If you can’t say #whitefragilitycankissmyass in a university political debate, where can you? But again, we need to acknowledge that counter arguments can be made in a democracy. In this case, some students saw the hashtag as harmful to race relations and called for Khan’s replacement as a council VP. 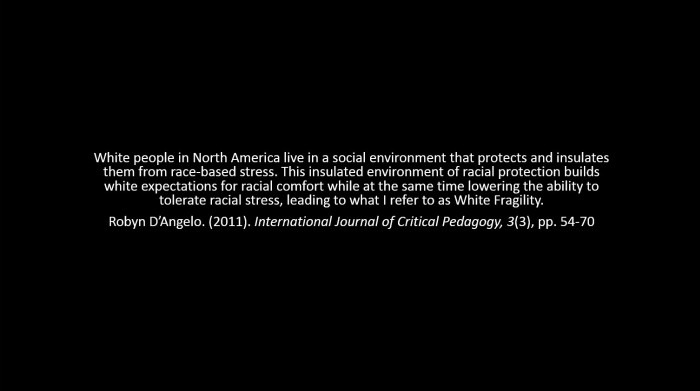 “Systemic discrimination” is also used to explain racial inequities. Rather than assuming that individuals consciously make racist decisions, this argument suggests that social, political and economic systems are set up in such a way as to reinforce existing disadvantage. For example, opponents of police street checks—aka carding—point to the overwhelming overrepresentation of people of colour who get stopped and rightly question if the practice of street checks targets people of colour by definition. They suggest that while carding might have some effectiveness as an investigative tool, the harm it causes to people of colour can be greater.

In his presentation at Superconference, Cole argued that police in schools (the SRO program) is unquestionably oppressive to those without privilege. To this librarian audience, he opined that police in libraries would inevitably lead to targeting undocumented immigrants. However, evidence on this outcome is decidedly mixed.

And sometimes, explanations for racism also posit analyses that double as provocations, i.e., ideas that seem designed to get under one’s skin (no pun intended):

I would also like to think that librarians value intentions as much as outcomes.

There is no doubt that as librarians, we need to listen to people of colour, validate their stories, and look at our policies and practices to ensure they do not unintentionally create an unwelcoming environment. But we owe it to ourselves to take the knee-jerk reaction out of our decision making, to listen to evidence, to engage in dialogue, to consider diverse points of view. Was I a little uncomfortable when Desmond Cole received a standing ovation at Superconference? Yes, but my overwhelming reaction was to feel exhilarated as I listened to someone who challenges my beliefs—and to me, that openness is what our profession is all about.

Todd Kyle, CEO, Newmarket Public Library, is a former OLA president (2016) and an active member of the OLA community. His contributions to Open Shelf include the Policy Wonk column. Todd can be contacted at tkyle [at] newmarketpl.ca

Two views on inclusivity
A conversation between Rashed Ahmad and Todd Kyle that offers two perspectives on inclusivity as it relates to the library world.
Safe spaces: The cultural appropriation debate

Headlines today scream about highly charged debates in the sociological and cultural sphere: Whose voices…