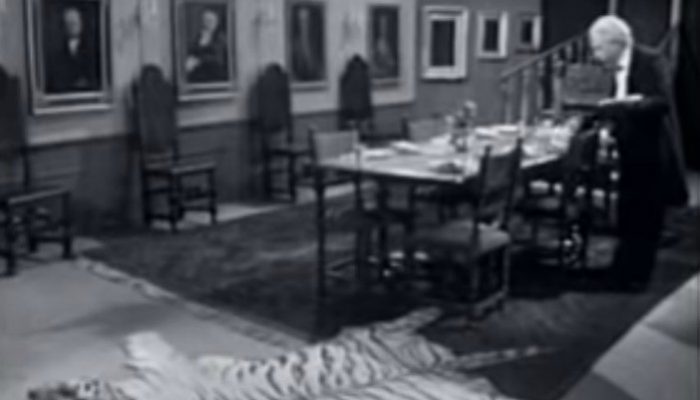 Come the holiday season, there seem to be few topics of conversation less controversial than deciding upon which is the perfect movie to ring in the end of the year (team Princess Bride here), but in a big part of Europe this question isn’t up for debate. On New Year’s Eve, many TV stations in Germany, Austria, Switzerland and Scandinavia will religiously broadcast a short black and white British sketch, in English, that is virtually unknown to most of the English-speaking world.

Dinner for One is served to 90 years old Miss Sophie by her equally elderly butler, James. Having outlived all her friends, Miss Sophie nevertheless insists of holding a birthday dinner every year, toasting each course with her long-departed guests. Following the same procedure as every year, James finds himself impersonating each of the absent guests, becoming increasingly inebriated with every round.

Originally recorded in 1963, Dinner for One holds the Guinness record for most frequently repeated TV program and has become a cultural icon. Earlier this year, I found myself attending a performance of the Swiss Club Toronto’s theatre group. The play was called Miss Sophie’s Erbe (Miss Sophie’s Estate) and while it took me a while to realize that it was intended as a somewhat dark sequel to Dinner for One, this seemed self-evident to those in the audience that had grown up watching the sketch every year.

This is the original recording of the show, complete with a short introduction in German. The sketch (in English) begins at around 2:30. Enjoy!

Are you aware of other such surprising holiday traditions? Feel free to share them in the comments below (and take our poll)!

Thomas Guignard is Director of Services at the Ontario Colleges Library Service (OCLS). He is also a member of the InsideOCULA editorial team.