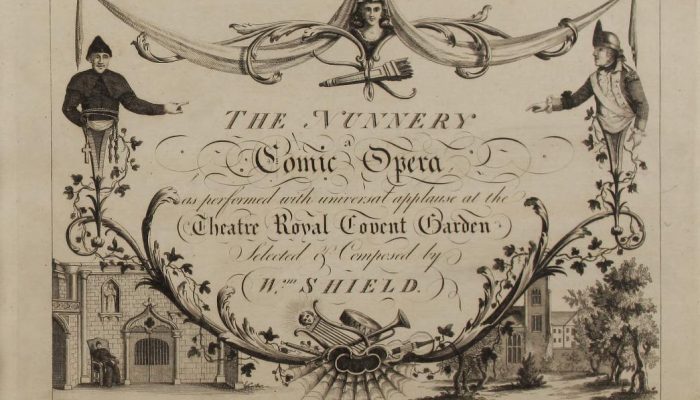 One aspect that sets the Western Libraries music collection apart from other academic music collections in Canada is the wealth of its special collections. The rare and unique items held here attract inquiries and visits from around the world. The tales of their origins are as colourful and varied as the items in them. Take, for example, the Opera, Gustav Mahler-Alfred Rosé, and Dr. James L. Whitby and Dr. Margaret Whitby Music Collections.

In the 1970s, Western Libraries, with support from the Faculty of Music, the University, SSHRC and alumni, purchased 2 large lots of opera-related documents—early edition and manuscript scores, libretti, books, and letters—from English antiquarian music dealer Richard Macnutt. Included in this acquisition were seventeenth-century opera scores from the Toulouse-Philidor Collection, a collection with origins in the personal library of an illegitimate son of Louis XIV, Louis Alexandre de Bourbon, the Count of Toulouse. This was followed by the acquisition of 384 opera libretti in 1983. By 1988, Music Library director William Guthrie could claim Western to be “one of the six major centres in North America for the study of pre-1800 opera” (Guthrie, p. 6).

Western Libraries’ acquisition of the Gustav Mahler-Alfred Rosé Collection was much more an accident of history. Rosé, who was the nephew of Mahler, the great post-Romantic composer and conductor, fled Vienna with his wife, Maria, in 1938. The couple settled first in the United States, then eventually moved to London in the late 1940s, when Alfred began to teach in the then-Conservatory of Music. With them came a treasure trove of family documents and heirlooms. Alfred, and later his widow, refused all invitations to return these cultural artefacts to Austria. Instead, they bequeathed them to Western, establishing the largest North American collection of documents related to the life and works of Gustav Mahler.

Understandably, the rich records of Mahler’s early years, including over 600 family letters and the earliest known manuscripts of the composer’s song and orchestral writing, attract worldwide attention. The Rosé Family history is intertwined with some of the most painful episodes in 20th-century European history. Alfred’s father, Arnold, was the longest-serving concertmaster with the Vienna Philharmonic. In the wave of anti-Jewish sentiment before the Second World War, he was forced to resign and, with his daughter, Alma, later escape to England. A professional violinist herself, Alma returned to Europe to make money by concertizing. The Nazi invasion trapped her in the Netherlands. When she tried to flee to neutral Switzerland, she was caught and sent to Auschwitz. Alma’s place in history is guaranteed by the dubious honour bestowed on her there: she was named leader of the Auschwitz Women’s Orchestra, a group that played for camp personnel and public functions including the arrival and sorting of prisoners. Alma died in captivity in 1944; her father died two years later in England.

The story behind the most recent large special collection acquired by Western Libraries is happier. The Dr. James L. and Dr. Margaret Whitby Music Collection is a testament to a lifelong passion for chamber music, performance, and treasure-hunting. The Whitbys met as students at Cambridge, where both participated in the university’s Musical Society. Together they developed a love for 18th– and 19th-century chamber music, especially string quartets, with James (viola) and Margaret (cello) meeting weekly with like-minded friends to read through new and favourite pieces. The string quartet reached its height of popularity in the early 1800s, so the available repertoire was practically inexhaustible and chamber music of the period was composed primarily for amateur players. Therefore, works of this era offered the Whitbys a balance of artistic reward with limited technical challenges, guaranteeing a pleasant creative pastime for two busy doctors raising a young family. In order to explore the lesser-known corners of the genre the Whitbys began to seek out neglected works not available in contemporary publications. Thus began a six-decade accumulation of antiquarian scores and parts that have gradually moved to Western Libraries since 2007.

All of these Music special collections at Western have an appeal to both academics and musicians. Efforts are constantly under way to make their contents discoverable and accessible. Over 1300 Whitby scores and parts are available online at the Internet Archive. These were joined this year by nearly 600 scores, books, letters, and librettos from the Opera Collection. Digital reproductions of documents from the Gustav Mahler-Alfred Rosé Collection were featured in two exhibitions in Vienna in 2018 at the Jüdische Museum Wien and the Austrian National Library’s Haus der Geschichte Österreich. Astrid Ramos, a Western Faculty of Information and Media Studies co-op student, has completed a project to create a collection finding aid, which will be launched in 2019; and a Fall 2019 exhibition will commemorate the 75th anniversary of Alma Rosé’s death in conjunction with Hillel Western’s Holocaust Education Week.

Brian McMillan is Director of the Music Library at Western Libraries, Western University. He can be reached at bmcmill2[at]uwo.ca.

Boehnert, Margaret. “The history of the Library of the College of Music, the University of Western Ontario.” 1969 paper for the School of Library Science, University of Toronto. (STORAGE ML33 .L6 U54)