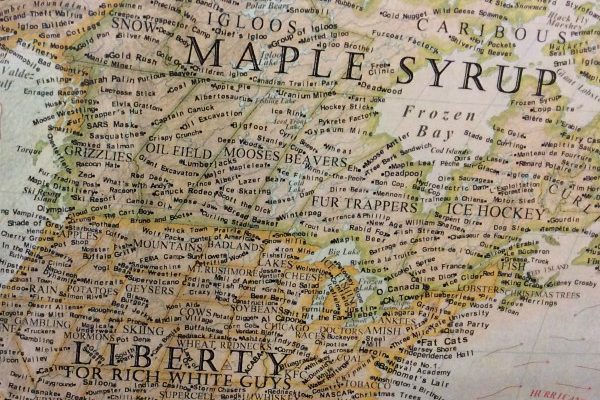 It’s 7 p.m. I open my office door to go home and am engulfed in a burble of laughter and chatter coming from a group of students congregated a few feet away. The students have staked their claim to a comfortable meeting place where they can drape themselves over cushy armchairs to “chill” awhile. I wonder if they’ve noticed the map display on the large display wall behind them. Even if they haven’t, many students have because the subject is potent: Stereotypes.

The map at the centre of the display—and of some controversy—is The world according to Americans (2009). Yanko Tsvetkov, a self-described storyteller and magician, has created this map as part of a series now published in his Atlas of prejudice. While satirical in nature, the map is a visual representation of ideas about “the other” that can (and have) spark(ed) powerful feelings and important conversations about the social construction of identity and bias.

Certainly that’s been the experience of Sherri Sunstrum, a cartographic specialist at the Carleton University Library. Young people—both in secondary school and university—have responded to the inherently problematic portrayals of people around the world with feelings and thoughts that range from surprise and disbelief to outrage and rejection.

And one consistent question: “Why don’t you take that map down?”

Sunstrum’s answer is straightforward. “We need to address issues of stereotypes, bias and prejudices. And if we can’t discuss them in a university, where can we have such conversations?”

Sunstrum and her colleague Maureen Leslie have contextualized The world according to Americans with other materials that include maps from the Barbara Petchenik competition, a children’s map collection held annually by the International Cartographic Association, and excerpts from the Carleton University Library’s challenged-materials policy. Sunstrum and Leslie have had many dialogues with students including conversations with students in grades 7 through 12 who attend the annual Enrichment Mini-Courses Program each spring.

In this storycast, Sunstrum unpacks the history of displaying this map at the Carleton library and why the map stays up or goes back up after students have taken it down. And while this tension over “challenged” material is happening at a university campus, such tension could very well happen across library sectors as we collectively debate the sharing of information and/or materials that can be offensive yet important to confront.

As Sunstrum explains, the Carleton University Library is the official repository for children’s maps from the annual Barbara Petchenik Competition.

Martha Attridge Bufton (MA, MLIS, Graduate Certificate in TBDL) is the Open Shelf editor-in-chief and a member of Editors Canada. Martha is the interdisciplinary studies librarian in Research Support Services at the Carleton University Library and her research interests include game-based learning, writing communities and culturally responsive pedagogy. She can be reached at martha.attridgebufton [at] carleton.ca.