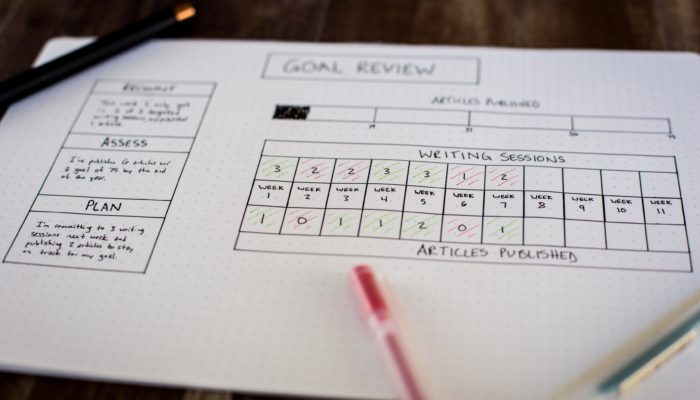 Are you able to maintain the invigorating feeling you get on January 1st? After the countdown, after I’m done hugging my friends and family, I always think, This is a new beginning. This’ll be the year! Yet, by January 31st, 90 percent of the time I’m back in my routine, with resolutions far from my mind. I usually placate myself with, Well, I have a whole year to get it done! Rarely do I use this time.

Our resolutions can fall short for a multitude of reasons. For one, they usually don’t include much forecasting:

I’ve recently stumbled onto another reason: We often don’t start planning early enough. Realistically, we should be planning our resolutions months in advance if we want to be successful. If you plan your New Year’s resolution in October or November, you have enough time to turn your one big goal into smaller ones and to complete the first phase of it before the new year comes. What greater motivator is there than starting off the new year with a head start on your goals? Finding an impetus in the upcoming year and a community and/or platform that will help motivate you is also crucial. Picking an event or time frame, ideally close to mid-year or sooner, by or in which to achieve another phase of your goal increases the chances of your actually completing it. Otherwise, the I have a whole year mentality creeps in. A community and/or platform keeps you honest and in the company of others who can cheer you on or inspire you to trudge forward.

Last month, I finished writing 50,000 words in a 30-day period. No, I haven’t lost my marbles. November is NaNoWriMo, or National Novel Writing Month, an online competition for would-be novelists everywhere (www.nanowrimo.org). For quite a few years now, my New Year’s resolution has been to write a novel. I’ve participated in NaNoWriMo three years in a row, in the hopes that it would inspire me, and it has, but this was the first year I completed the 50,000-word goal of the competition. Now that I finally have the first draft of a novel, I realize why I haven’t ever completed my New Year’s resolution of writing a novel: I didn’t plan far enough ahead.

In November, I started out with one goal, and New Year’s resolutions far from my mind. My goal: Write 50,000 words to win this year’s NaNoWriMo, and then, well, I’d see what would happen next. Now that I’ve done that, I realize I have a draft that could be something, but it’ll require a lot of hard work on my part to bring it to its full realization: A novel. Since I can’t afford to let things lie every month (i.e., doing less laundry and having a sadder social life), as I did throughout November to reach my initial goal, it’s going to take a significantly longer amount of time to achieve my next goal, which is to have the second draft of my novel completed by August 2020.

When I first started NaNoWriMo three years ago, I thought, Why do they have it in November? Why not January? I have my answer: NaNoWriMo is just the first step in the process. Writing a novel is an uphill battle involving many drafts and edits, all of which can easily eat up a year or more. Never mind what comes next, the querying of agents and seeking a publisher/learning how to self-publish. Currently, I have what amounts to a concrete vision—a bunch of words on the page that follow a loose plot and develop the characters that have been living in my head (for far longer than I’d care to admit). The next part is up to me.

Thankfully, I have two upcoming months that are boosting my confidence. January with its New Year’s resolutions and April with Camp NaNoWriMo. Due to the holidays, December is essentially a writeoff. It’s the perfect month to catch up on my chores, let my creative juices simmer, and develop some perspective regarding my draft. January, however, is the perfect month for Phase 2: Reading my first draft and making a concrete schedule that takes me to April 1st. April is Camp NaNoWriMo. Similar to NaNoWriMo, Camp NaNoWriMo is a time to set word-count goals. However, the camp is in April and July; 10,000 words or more are accepted; and you can work on any writing project, not necessarily a novel. Once I complete Phase 2, I’ll be more than halfway to my last deadline: July 31st.

The gratification of completing my November goal is still fresh and is propelling me forward into the new year. Plus, I now know what work environment/schedule motivates me to achieve my writing goals. For the first time in a long time, I’m looking forward to my New Year’s resolution.

Nikolina Likarevic is the CEO of a public library in Ontario. She is a graduate of the Master of Information program from the University of Toronto and holds a MA in modern literature. She is the Deputy Editor of Open Shelf and the Associate Editor of Sewer Lid, a magazine of urban art and literature.