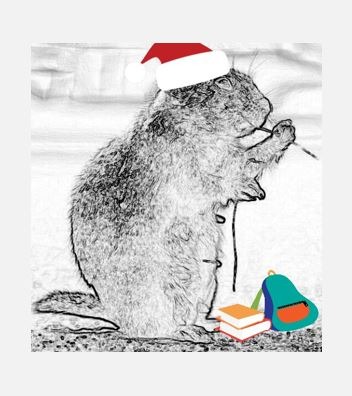 By two elves and a reindeer

’Twas the night before Christmas and all through the stacks

Not a dust mote was floating, all bindings intact.

The book trucks stood idle in a line so precise,

Every charger glowed quietly, a beacon for mice.

The staff had gone home, many hours long past

Secure in the knowledge the silence would last.

And I in my crawl space, free of human agitation,

Had just settled down to a peaceful hibernation.

But as I surrendered to a calm winter’s sleep,

I was jolted awake by a screech loud and deep.

“Good gracious,” I thought. “What could be the matter?”

And scrabbled to my feet, making even more clatter.

I sprang through the hole I had chewed oh so blithely

An escape hatch most useful that I had planned very wisely.

Down the staircase I leapt, bottoms up at the end

Just in time to see something I did not comprehend.

The book drop yawned open, no hands were in sight

Instead, a red cushion pushed its way to the light.

“Oh no, not a cushion,” I said to myself

But a backside, most generous, presented itself.

Belonging, it seemed, to a man not of good cheer.

“Botheration,” he muttered. “What a mess, what a trial.”

And he fell to the ground, out of breath for a while.

Huff and puff, puff and huff, he then hauled himself upward

The sight of his efforts left me feeling quite tuckered.

Then there he stood, in red velvet and fur

No soot marred his costume though he’d caught the odd burr.

He reached into the shoot, fished down the hole with a frown

And hauled out a sack, lumpy, frumpy and brown.

Gazing over the vast lobby, he searched for a bit

Then he grinned as he saw the festive tree brightly lit.

“What a trick I shall play,” he murmured, sarcastic.

“Leaving books long past due, that’s the Grinch not Saint Nick.”

With a chortle most jolly, eyes twinkling, smile cheery

He went straight to his work, no longer all weary.

From the sack he withdrew paperbacks and hard covers

Clearly he was a serious book lover.

From what I could see, his tastes were most eclectic

He spent several minutes going right round the tree

And the tomes added up to a hundred and three.

With a sigh and a moan, he straightened to finish

“I’m glad that is done, now I really must vanish.”

I know it is wrong to leave a mountain of fines

But I need all my cash for Earl Grey tea and clementines.

“Poor fellow,” I realized, “Clearly he has not a clue

That fines have been cancelled, they’re not an issue.”

Then without thinking, I made a small sound

And he spun on his heels, looking quick ‘round and ‘round.

I froze in my tracks, hoping not to be caught

But he captured my gaze in a moment most fraught.

“Oh Ms. Groundhog, you too in this place so sublime?”

“No matter,” he whispered, “We’ll be partners in crime.”

Then lifting his hand in a jaunty salute

He danced a quick jig, then out the front door he did scoot.

And I heard in an echo most ethereal and bright

“Merry Christmas to all and to all a good night!”

Editor’s note
This poem arrived unsolicited. I am not sure if it constitutes flattery (i.e., imitation not plagiarism) or not—only Clement Clarke Moore could say for sure—but, since hawks, bears, cats and other critters have been known to take refuge in libraries, I think it seems only fair that we publish this groundhog tale.

Our contributors are shy and retiring …