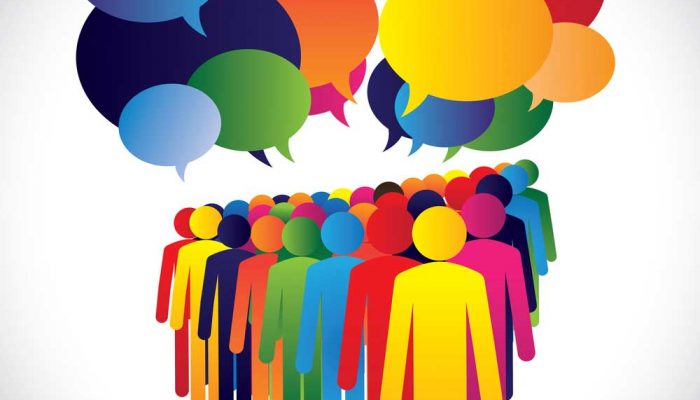 The Newmarket Public Library’s most recent Strategic Plan was aimed at shifting the Library’s focus to become a centre of community dialogue and discovery. Those on the planning committee felt that the Library needed to become more of a hub than it was, somewhere where spontaneous conversation could erupt and the community could become more engaged. Linked to this was a need to forge additional partnerships and seek more outreach opportunities. 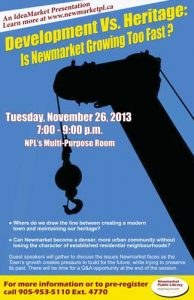 The Newmarket Public Library has long offered a lot in the way of adult programming. For years we ran numerous monthly general interest programs and workshops on topics such as gardening, decorating, creative writing, photography and more. While these were often quite successful, the usual lecture style did not lend itself to true audience participation or community input. What we wanted was a way to allow citizens more of an opportunity to express their views, debate, and have a shared conversation with others in their community

After much discussion, CEO Todd Kyle and I decided on a new format of programming that would help facilitate better conversation. Todd came up with the name IdeaMarket, which pays homage to the marketplace history of Newmarket. We are fortunate within the Newmarket Public Library to run the York Info Community Information & Volunteer Database (along with partner libraries East Gwillimbury, Whitchurch-Stouffville and Georgina) which is a rich database of information on community organizations and social services.  We made a list of possible topics and contact names from within the database. We chose topics by noting what the community was talking about and what was in the local paper. We set up an online survey and spoke to a few people of influence in the town. We contracted a facilitator to avoid the possible perception that the Library was taking sides or being political.  Seating was set up in the round to help break down any perceived barrier between panel and audience.  For a few programs we were approached by citizens with an idea and we worked closely with them on the program planning and set up.

What outcomes did we expect? We sought new directions for programming that allowed for more interaction, were non-confrontational, led to additional committees and conversation, and brought groups together that were unaware of areas of common ground. We expected people to leave with more contacts and knowledge and that the citizens would feel more engaged in the community. We hoped that community groups would form and conversations would continue beyond our walls. This has been somewhat difficult to track but we do know of three examples that have worked. An Educational Technologies group has formed out of a recent program on the future of work and learning. Panellists from an event on conventional and alternative medicine have been meeting after their program and looking at ways to continue to work together. Our co-organizer on a program on the war on drugs has met audience members and formed additional connections. 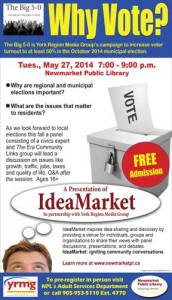 What outcomes did we not expect? We did not expect the program attendance to be as high as it was. We did not expect the level of interaction was between panel and audience, both during and after the program. Even with what we thought would be a possibly rocky IdeaMarket on the legalized prostitution debate, we found that one of our most civil and thoughtful conversations ensued. The volume of interaction and questions asked has astounded us.

IdeaMarket events to date have included a discussion of Development versus Heritage; Poverty, Homelessness and Mental Health, and Why Vote? in collaboration with our local paper. The aim of this last program is to increase voter turnout for the upcoming municipal election. We have also had interest from Town staff to be a part of this program to engage the citizens further in regards to the voters list along with representation from MPAC (The Municipal Property Assessment Corporation).

To date IdeaMarket has definitely surpassed our exceptions. This is not to say it has all been a bed of roses. There was a small amount of controversy in the days leading up to the prostitution topic and an apparently “anxiety producing” library display about town development. But, on the whole these are very small bumps in the road. So far the response from the public, board and local politicians has been very supportive.

What is next for IdeaMarket? We are looking for ways to help the conversation continue beyond our monthly program, including providing additional space in the library and facilitating a blog where participants can continue their conversation and actions online. Good things ahead!

Jennifer Leveridge is the Community Services Librarian at the Newmarket Public Library where she is responsible for the York Info Community Information & Volunteer Centre and adult programs. She can be reached at  jleveridge [at] newmarketpl.ca.