This September I assumed my role as scholarly communications librarian/digital projects officer at OCAD University—a position made possible by OCULA’s 2015 New Librarian Residency Award. One of my first tasks was to lead planning efforts for Open Access Week along with our Scholarly Communications Advisory Group. Open access is still relatively new to OCAD U, but in light of the Tri-Agency open access and open data policies, it was the time to begin the conversation. The task presented us with a fascinating challenge: What should Open Access Week look like at an art and design school? And how to engage a diverse group of faculty with widely differing creative disciplines on a topic they may not be familiar with?

Open access is not something that can be quickly summarized or compressed into a few words. It is a constellation of issues involving a number of competing interests and complex challenges. I began with an environmental scan to compile ideas for programming. Then I spoke with Joy Kirchner, University Librarian at York University, who knows a thing or two about Open Access Week events and who shared a key insight: “Meet faculty where they are and invite them to a round table conversation on open access.” Of course it was best to start with the very people you are trying to reach. We reformatted our program to lead with a panel discussion with as many stakeholders as possible. Our panel, Open forum on open access: What are the implications of opening up our research at OCAD U?, included Martha Ladly (Faculty of Design, Digital Futures), Lynne Milgram (Faculty of Liberal Arts and Sciences), Greg Van Alstyne (Strategic Innovation Lab, Faculty of Design), Jess Mitchell (Inclusive Design Research Centre), and Mike Steventon (Research Technology). Greg Singer, Director of Research Services, assumed the role of moderator. 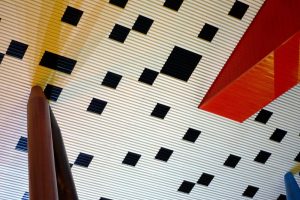 Photo of Ontario College of Art & Design by Ian Muttoo.

Multiple speakers on the panel discussed the ways publishing has changed as a result of digital technology and, despite obvious challenges, there appeared to be agreement that there is
value in going open. Greg Van Alstyne discussed open access as a form of disruption, which he believed could be a positive force from the perspective of an optimist and a futurist. He noted that his team releases work on Creative Commons model licenses that, when combined with print-on-demand services, create complimentary avenues of dissemination. Due to “the low cost of dematerialized information,” he explained, “self-publishing is no longer the vanity press.” Jess Mitchell, Senior Manager of R&D + Design at the IDRC saw open source and open access as part of the broader philosophy of inclusion that underpins accessibility.

Speakers acknowledged that in certain disciplines publishing and research outputs vary widely, which comes with its own challenges. Martha Ladly noted that from the perspective of an interdisciplinary maker, there are a lack of good models for open access work. Citation and impact are not as prevalent in design and engineering as cultural outreach. When the discussion was opened up to the audience, attendees offered examples of open source solutions for museums, such as Fluid Engage, a piece of software that lets users interact with museum exhibits in a flexible and accessible manner.

After the panel, Greg Singer delivered a session on the Tri-Agency open access and open data policies, followed by Jill Patrick, University Librarian, who presented on the OCAD U Open Research Repository. Jill Patrick not only showcased the new IR, but outlined the various ways it will help OCAD U reach its strategic objectives as an institution. The day ended with the launch of the open access book, What is information?: Propagating organization in the biosphere, symbolosphere, technosphere and econosphere by Robert K. Logan, Chief Scientist and a co-founder of Strategic Innovation Lab (sLab) at OCAD University.

Day two of OCAD U’s Open Access Week programming began with three guest speakers, Wayne Johnston (University of Guelph), Corina MacDonald (Mat3rial), and John Dupuis (York University), who spoke about publishing options in open access, a case study in open access arts publishing, and the myths and realities of “predatory” open access. The two-day program concluded with a screening of the documentary The Internet’s Own Boy: The Story of Aaron Swartz.

In one key moment the conversation turned to paywalls, electronic storage, and migration and a panelist mused: “I print everything, because the worst way to store something is electronically.” At that moment it was clear what the library and its IR offers: not just access, but stability and preservation. In some cosmic coincidence I received a Tweet from a colleague out east: “We should probably focus a lot more on preservation and storage than access at this point!”

Chris Landry is the Scholarly Communications Librarian/Digital Projects Curator at OCAD University and recipient of OCULA’s 2015 New Librarian Residency Award. He can be reached at clandry [at] ocadu.ca

In the lightning round session at the 2014 Super Conference, six students from across Ontario…

As the winter term (and hopefully winter itself) comes to a close, we welcome the…