Seth is the acclaimed Canadian cartoonist and author of the celebrated Palookaville series. His distinctive drawings have also illustrated books about Charles Schultz and Dorothy Parker, among others. Seth was a keynote speaker at the recent OLA SuperConference. I interviewed him over email.

A silly first question perhaps, but what do call what you create? Comics? Graphic novels? Is there a difference?

I call myself a cartoonist. What I do is cartooning. As for the objects themselves — I have bowed to the horrible term “Graphic Novel”. I still like the name “comic book” but it is confusing to the general public now.  They understand that the “serious cartoons” are graphic novels and the “old stupid cartoons or superhero” are comics.  So, I bow.

Call them Graphic Novels. Who cares?

That said, years ago I made up the term “Picture Novella” for my books as a bit of an in-joke and still use it on my title pages. No one has ever got the joke. Sigh.

Your drawing style is unmistakable and, in my mind, fresh, and yet it has been called “nostalgic”. Is your aesthetic trying to reclaim something from the past?

That said, back then I made a very conscious choice to look at the cartoonists from the early to mid 20th century for my influences.  I was deeply attracted to the cartoonist from the New Yorker magazine from those years and they had a tremendous effect on me.

Of course, so much of what I am interested in is from those decades so it is hard to say if I was trying to capture something “old fashioned” in the drawing or if the drawings merely reflect an “old fashioned” personal aesthetic that I have.

The role of cartoonists has been amplified recently because of horrific events in Paris. How you do feel about the cartoonists at Charlie Hebdo? Are they radicals or just carrying on in the manner of Daumier and George Cruikshank?

I have a lot of respect for daring satirists. And I have plenty of tolerance for adolescent humour too.  I suspect the Charlie Hebdo cartoonists fall somewhere in between those two roles. I’m proud that they stood their ground and very saddened they had to die for drawing some lines on paper. I’m pleased to be associated with them as a cartoonist — even if the connection is extremely tenuous.  Still, I am proud to be in their extended family.

To continue that theme a bit, can comics/graphic novels inspire social change or are they merely satirical provocations or whimsical entertainments? Would you say that your interest in comics is more about the human condition and less about satire and comical situations?

I believe art can change the world … but, I’m not as sure when that comes to the political, social world. I think it works best on a one to one basis. Art changes people. Art transmits personal experience and ideas and empathy. I am just reaching out to communicate with others my experiences and thoughts. I have been profoundly changed by the books and comics I’ve read, the music I heard, and the films or paintings I looked at. 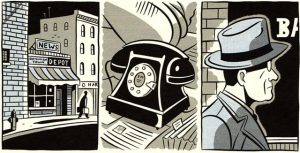 I am very fond of David Rakoff’s Love, Dishonor, Marry, Die, Cherish, Perish and part of that enjoyment was your work on it. The portraits of the main characters are stunning. How did you approach interpreting these characters.

In the most boring of ways. I simply imagined their faces in my mind (based on what kind of people they seemed like in the book) then looked through old books and magazines for faces like that — and then drew them using both my imagination and the photos as guides.

Pretty straight forward. By the way, I loved the book as well.

You often reference Chris Ware as someone whose work you admire (Building Stories is one of my favourite books). Who else would you recommend.

Chester Brown, of course. One of the most brilliant and original cartoonists.

Joe Matt. He hasn’t done much work lately but his auto-bio comics are among the most entertaining ever created.

Michael Deforge. The most exciting of the new cartoonists coming along.

I could go on and on. There are a tremendous number of fabulous cartoonists working now.  Just starting out and well established.

In Palookaville #22 (due out in April) you reflect on growing up in small town Ontario, including observations about the local library. What did the library mean to you as a child or young adult? What do libraries mean to you now? 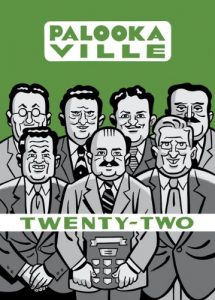 That library in Tilbury Ontario was a haven to me. I can still see it perfectly in my mind’s eye today. I have great affection for it.

Its great power for me (which I see in retrospect) was the opportunity to explore a collection of books. Something gathered together and placed before me so that I could wander its shelves and randomly discover things.

What a marvellous and interesting opportunity for a child in a small town where culture was not an overriding concern. The one place too where the pop culture wasn’t the main focus of discussion or interest.

Today I do not use the library as much as I did as child because I am very focused on having MY OWN library. That said, I am very grateful they still exist. I use them for research and a large number of my readers read my books via the Library!!!

You are a very eclectic artist often working on many different projects. What can we anticipate from you in the coming year?

Nothing too extraordinary this coming year. In the same vein mostly. I have a 10 episode strip in The Walrus that has just begun serialization. It’s called Owen Moore.

I have a book or two coming out: Palookaville 22 in the spring and the 4th Lemony Snicket book (All the Wrong Questions) in the Fall. It’s an exciting one. The conclusion.

My cardboard city Dominion is touring western Canadian galleries currently. Just left Lethbridge and is on it’s way to the Dunlop Art Gallery in Regina next.

I believe there will be a Toronto premiere of the NFB documentary Seth’s Dominion sometime this year too.