I really wanted to like this book. But for the most part, I didn’t. And that’s a shame. Books that effectively champion the continuing importance of libraries are few and far between.

The subtitle of BiblioTech (Basic Book, 2015) is “Why Libraries Matter More Than Ever in the Age of Google.” At the outset let me be clear that Palfrey is a friend of libraries and passionately presents the case for their value. He was the head of the Harvard Law Library and is a recognized authority on the internet and emerging media. 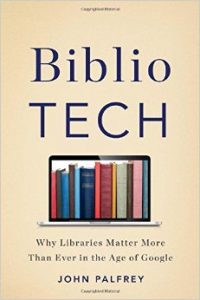 But who is Palfrey writing this book for? Librarians? The general public? Politicians? Perhaps all of these and more? This matters because the core messages are different for different audiences. He says his audience is “all those who do not work in libraries and who should be taking a greater interest in the fate of these essential knowledge institutions on which we rely more than we seem to realize.” That said, the book repeatedly seems to speak directly to those involved with libraries.

Frankly I wouldn’t give this to a member of the public; the “inside-baseball” library stuff is too obscure and … boring. No politicians is going to read this (similar reasons to above), especially because of the naïve view of public funding espoused by Palfrey (more on this later).

So, let’s assume the audience is really … us: librarians, library workers, and those directly connected to libraries. For us, Palfrey has a strong message. Or at least that’s what he says repeatedly. And apparently many of us aren’t going to like it (ditto the repeating). Cue the “library crisis” meme.

Palfrey’s call to “hack the library”, engage in “radical collaboration” and to position the library as “platform” will seem far too familiar to many. “Been there, done/doing that” will be much of the response.

So, what’s the way forward according to Palfrey?

“Digital innovation must happen, and it will, but too great a rush to change will break down too much in libraries that is of value, too quickly. I favour a hybrid of the virtual and the analog, the strong middle course that falls between ‘the if it ain’t broke don’t fix it’ approach and the ‘let’s get on with the change more quickly’ argument.”

Seriously? If this milquetoast recommendation is the “strong message” that ensures our relevancy we have some big problems ahead. This tepid approach is so 10 minutes ago.

I’m sitting in a public library as I write this (Richmond Public Library in B.C. to be exact). Around me are examples of Palfrey’s recommendations in action: public meetings, consultations with social workers, interviews with employment counselors, and, of course, people reading various things (online and in print) and children everywhere. Some people (like me) are getting their work done (whatever that might be).

The woman in the next cubical to me is running her business while at the library. She is taking calls on Skype, gathering info on the Internet, and providing purchasing advice to clients. And, she is clearly also working on school work of some sort. This vibrancy and innovation is something I see in many libraries.

What’s missing in Palfrey’s analysis? Two for example: 1) a more fulsome understanding of the community-led library and its role in community development, and 2) the role research libraries are playing in the transformation of scholarly communications. In both these cases libraries are profoundly changing their roles and their influence.

Palfrey references a number of the leaders and innovators in the U.S. as beacons of hope (specifically Sarah Houghton, Jessamyn West, and Melissa Techman). And they are. They are doing wonderful work; they are true leaders. But they are not alone. In my experience librarians and library workers are fully engaged in the transformational characteristics that Palfrey calls for. We are well on our way.

So the danger here (and danger maybe too strong a word) is that politicians and citizens will in fact read this book and say “well, we already have that; is that it?”). The thesis of BiblioTech gets us to where we already are; the thesis of David Lankes’ Expect More, as a counter example, is to set our sights on an even more profound role. I’m with Lankes.

Near the end of the book Palfrey acknowledges that library transformation he advocates can only occur with sufficient (and increased) public funding. We need more money. We should ask for it. And based on the arguments made in this book, we will get it. That’s the funding strategy: we deserve it.

The funding of public services is fraught with political and ideological land mines, especially in the U.S. Palfrey ignores all that. There is no recognition that funding public libraries means less funds for other public services. Setting up a funding battle among all the other critically important public services is something Bobbi Newman has called the “Public Services Hunger Games.” We diminish each other in the process.

There are lots of ideas and issues in BiblioTech that I agree with. While not many are the “call to action” that is the mantra of the book, one area where I fully agree a transformational change is needed is in the area of research and development. We need better (and more) R&D in our field. We don’t’ suck at it; we just don’t do enough of it.

The library schools/iSchools have very limited research capacity and research libraries have only recently emphasized the role of their librarians as researchers. And very few libraries have established research agendas. There are significant questions in our field but we are not trying to answer them. We are letting others with similar interests, but very different motivations, do the research work of our field. Shameful.

So, here’s where my recommendation may surprise you. You should read this book. It is worth your consideration. It may not outline the ongoing importance of libraries as I see them but it is a view of our future we should be aware of and understand.

Archiving the Unspeakable: Silence, Memory and the Photographic Record in Cambodia by Michelle Caswell. Michelle…