Archiving the Unspeakable: Silence, Memory and the Photographic Record in Cambodia by Michelle Caswell.

Michelle Caswell, a professor at UCLA’s Faculty of Education and Information Studies, has enhanced research she did for her PhD on the photographic record of the Cambodian genocide and published it in this recently released title. Caswell sets the book up with a theoretical lens, largely referring to anthropologist Michel-Rolph Trouillot’s theory of archival silences before moving on to a more concrete description of the archives and how they were assembled. 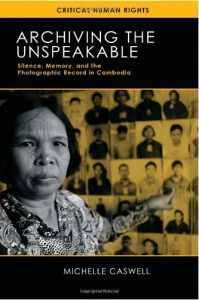 The Cambodian genocide took place during the Khmer Rouge regime, 1975 – 1979. Cambodia, led by the tyrant Pol Pot, ordered the torture and executions of nearly two million Cambodians in those few years in an effort to transform Cambodia into what the Khmer Rouge considered the ideal agrarian society. This book details the archive of mug shots that were taken at the infamous S-21 prison (also known as Tuol Sleng), a former high school turned prison and death camp for Cambodians accused of various acts of treason (many of them false).

While there are four major collections of records of the Khmer Rouge, Caswell limits her research to the now digitized photographic archive. The photographs were not known to exist until two Americans found a few hundred photos at the prison. A multi-institutional effort ensued to locate the remaining photographs and restore, preserve, and digitize them. American universities Yale and Cornell were involved, as was DC-CAM (the Documentation Centre of Cambodia), the Tuol Sleng Genocide Museum and various individuals.

The collection now consists of more than 5,100 largely unidentified mug shots of prisoners taken upon their “registration” into Tuol Sleng. Very few people survived their time in the prison.

Caswell’s first chapter eerily describes the indexing of prisoners known as “bertillonage” (developed by Alphonse Bertillon) based on physical features captured by the camera. The second chapter describes the development of the archive – the individuals and institutions that were involved, the challenges of assembling the record, and discovering far more documentation than anyone expected.

Included in this chapter are the ways in which the photos were used to locate perpetrators of the genocide and provided evidence of torture and murder in court proceedings. Had it not been for the archive, many of the perpetrators might not have been held to account for their crimes against humanity.

The third chapter focuses on how the images provide opportunities to narrate the conflict after a period of deliberate “amnesia” in Cambodia: many young people in Cambodia today do not know the history of the genocide and don’t believe it (a textbook was developed recently to teach students about the genocide, which is increasing local awareness).

The book ends with an affirmation of the power of the images to give voice to victims and invite new witnesses to the genocide, focusing on how archives are transformed both by their use and by digital technologies.

Caswell’s book breaks new ground for information professionals. There have been many articles and shorter pieces on archives and human rights, but rarely has a full book length work been published. It’s an important read for anyone interested in the connections between our work as information professionals and its potential impact on victims of violence and conflict in the world.

Archiving the Unspeakable: Silence, Memory and the Photographic Record in Cambodia by Michelle Caswell. Published in 2014 by the University of Wisconsin Press. This title is part of the Critical Human Rights Series.

I really wanted to like this book. But for the most part, I didn't. And…