“Good is the enemy of great. And that is one of the key reasons why we have so little that becomes great. We don’t have great schools, principally because we have good schools. We don’t have great governments, principally because we have good government. Few people attain great lives, in large part because it is just so easy to settle for a good life. The vast majority of companies never become great, precisely because the vast majority become quite good – and that is their main problem.”

Jim Collins.
Good to Great: Why Some Companies Make the Leap and Others Don’t (2001) 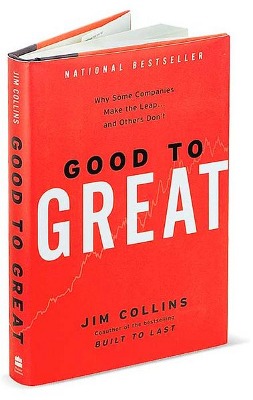 The Public Library should be structured around 5 Levels of Leadership. Level 5 (Executive) builds enduring greatness through a paradoxical blend of personal humility and professional will. Level 4 (Effective Leader) catalyzes commitment to and vigorous pursuit of a clear and compelling vision, stimulating higher performance standards. Level 3 (Competent Manager) organizes people and resources toward the effective and efficient pursuit of pre-determined objectives. Level 2 (Contributing Team Member) contributes individual capabilities to the achievement of group objectives and works effectively with others in a group setting. Level 1 (Highly Capable Individual) makes productive contributions through talent, knowledge, skills, and good work habits.

First Who, Then What

The Public Library should get the right people on the bus, the wrong people off the bus, and the right people in the right seats – and then figure out where to drive it. People are not the most important asset; the right people are. Good to great management teams consist of people who debate vigorously in search of the best answers, yet who unify behind decisions, regardless of parochial interests. When in doubt, don’t hire – keep looking. When you know you need to make a people change, act. Put your best people on your biggest opportunities, not your biggest problems.

The Public Library should maintain unwavering faith that they can and will prevail in the end, regardless of the difficulties, and at the same time have the discipline to confront the most brutal facts of their current reality, whatever they might be. Lead with questions, not answers. Engage in dialogue and debate, not coercion. Conduct autopsies, without blame. Build ‘red flag’ mechanisms that turn information into information that cannot be ignored.

The Public Library should be a hedgehog and not a fox. Foxes pursue many ends at the same time and see the world in all its complexity. They are scattered or diffuse, moving on many levels, never integrating their thinking into one overall concept or unifying vision. Hedgehogs, on the other hand, simplify a complex world into a single organising idea, a basic principle or concept that unifies and guides everything. It doesn’t matter how complex the world, a hedgehog reduces all challenges and dilemmas to simple – almost simplistic – hedgehog ideas. For a hedgehog, anything that does not somehow relate to the hedgehog idea holds no relevance. The Hedgehog Concept has three intersecting circles: what you are deeply passionate about; what drives your organisation; what you can (and cannot) be best at.

A Culture of Discipline

The Public Library should think differently about the role of technology. Never use technology as the primary means of igniting a transformation. Be pioneers in the application of carefully selected technologies. Does the technology fit with your Hedgehog Concept? If yes, then you need to become an early adopter of that technology. If no, then you can settle for parity or ignore it entirely. ‘Crawl, walk, run’ can be a very effective approach, even during times of rapid and radical technological change.

Public Library transformations often look like dramatic, revolutionary events to those observing from the outside, but they feel like organic, cumulative processes to people on the inside. Sustainable transformations follow a predictable pattern of build up and breakthrough. Like pushing on a giant, heavy flywheel, it takes a lot of effort to get the thing moving at all, but with persistent pushing in a consistent direction over a long period of time, the flywheel builds momentum, eventually hitting a point of breakthrough. Preserve core values and core purpose. Change cultural and operating practices, specific goals and strategies.

John Pateman is the CEO / Chief Librarian of the Thunder Bay Public Library. His Open for All? column explores the nature of libraries and their commitment to openness.

I really wanted to like this book. But for the most part, I didn't. And…

Archiving the Unspeakable: Silence, Memory and the Photographic Record in Cambodia by Michelle Caswell. Michelle…