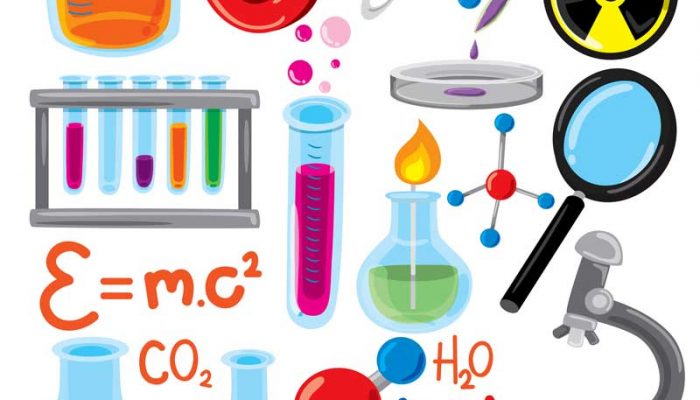 In 2015, McMaster University Library was invited to participate in Science Literacy Week (September 21-28). This event, launched in 2014, was created by Jesse Hildebrand in partnership with University of Toronto Libraries. The scope expanded for 2015, with the goal of creating a cross-country celebration of science.

The work of planning for Science Literacy Week was taken up by the staff team in the H. G. Thode Library of Science and Engineering.  Starting late in the summer as the school term approached, we faced a significant time constraint to create more than just a few in-house activities and events.  Recognizing that the campus and larger community is already full of unique science events, we decided to reach out and find collaborators at McMaster and beyond.

The Thode team began investigating already planned events coinciding with Science Literacy Week that would fit our simple criteria: a connection to science that could have broader appeal. We reached out to departments, campus institutes, science-oriented student groups, and science outreach programs. In our messaging, we positioned Science Literacy Week as an umbrella program under which any science-related educational event could be included. The benefit to these event organizers was more marketing for their event, handled by us. The McMaster Planetarium, Sidewalk Astronomy Group, and McMaster Cryptoparty, among others, were interested in the cross-promotion opportunity.

Promotions consisted of a news article on both the University and Library homepages, digital signage in the library, a Science Literacy Week Canada webpage listing, social media postings, and listings on the University Events webpage and calendar. Administrative and communications staff in departments across campus agreed to email students and faculty the event listings, resulting in many of the faculty promoting the events in their classrooms as well. 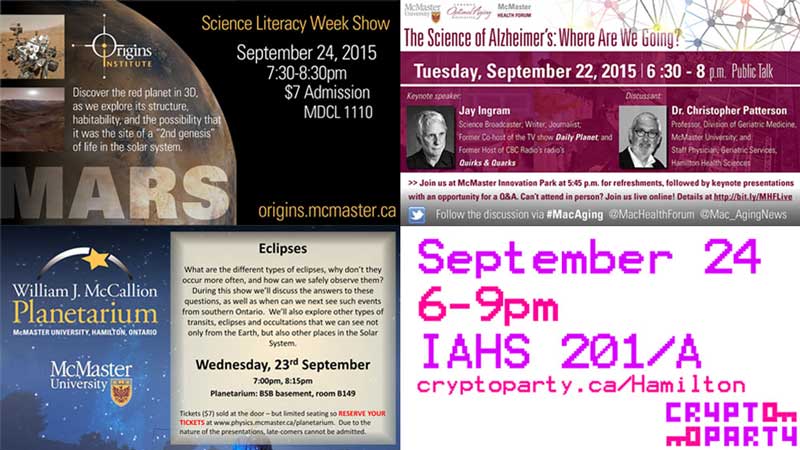 Every respective lunch hour featured a curated collection of TED Talks shown on our mobile screen. Each set of videos was selected around a theme (e.g., the universe, the human mind), and was further aligned and promoted with the content in our display case. TED Talk videos are ideal for this purpose, because the Creative Commons licence makes re-use easy.

Thode ran a science trivia contest on Twitter with prizes for correct answers; this was also intended to build the library’s Twitter followers. For a bit of competitive fun, students were encouraged to play our Science Literacy Arcade game and test their general knowledge of various scientific fields. The ‘arcade’ ran off of a WordPress site featuring the Pew Research Center’s “Science Knowledge Quiz” and Jefferson Lab’s “Who Wants to Win a Million Dollars? – The Science Game.”

The Lunch with TED talks had a regular audience of 10-20 people. In response, Thode was contacted by the TEDxMcMasterU organizing committee, who are currently planning regular TEDx Salons hosted in the Library in 2016. Our science arcade game was played by approximately 20-40 people every day. Thode Library’s Twitter broadcasts resulted in the largest increase of new followers in the past year, and was an important tool for promoting all events on campus.

As for our cross-promoters, a number of the groups sent us the results of their successful events, and all are interested in participating again next year. Additionally, other groups on campus have reached out, stating that they didn’t have enough notice for Science Literacy 2015, but would like to be involved in 2016. Science literacy rang a chord with the affiliates of McMaster University; as a library, we have found an event through which all members of the community can find value and be involved.

All in all, Science Literacy Week at McMaster was a great success. In an email response to the Thode Library team, Jesse Hildebrand, the founder, stated, “it would appear that Hamilton was one of the most successful cities for this in all of Canada.”

Plans for Next Year

The Thode Library Team is already planning for Science Literacy Week 2016, with the hopes of attracting more participants and more interest in the week of events. This is a great initiative and we are excited to see how the McMaster community continues to embrace science literacy.

Andrew Colgoni is the Services Librarian at the H. G. Thode Library of Science and Engineering at McMaster University. He is also an instructor in McMaster’s innovative Integrated Science program. You can find Andrew at andrew.colgoni.me and @colgoni.

Erin Stienstra is currently a Library Assistant at McMaster University’s H. G. Thode Library of Science and Engineering. She holds a Bachelor of Arts in Psychology and a Library Technician Diploma from Seneca College of Applied Arts and Technology. She assists with providing numerous services for students, and can be reached at stienste [at] mcmaster.ca.

Jill Bedford is a Library Assistant at the H. G. Thode Library of Science and Engineering, McMaster University doing research help, ILL, IT help, reserves and circulation assistance at the single point service desk. She is the current chairman of the Thode Library Science Literacy Week Canada committee. Jill can be reached at bedford [at] mcmaster.ca.

Tim Wray is a Library Assistant at the H. G. Thode Library of Science and Engineering at McMaster University. He provides a variety of services for users and assists in managing the social media accounts for Thode Library.

Keara Farragher is a Library Assistant at the H.G. Thode Library of Science and Engineering at McMaster University. She holds a Bachelor of Arts in Sociology from the University of Toronto and a Library Technician Diploma from Seneca College of Applied Arts and Technology.