I talked to a very upbeat Tom at 3pm on a Tuesday. My energy was initially reflecting a typical afternoon slump but Tom’s infectious energy picked me right up.

Hi Tom! What have you been up to today?

Well, I started at noon today, so I came in and did some social media work. I coordinate our social media presence. I had a meeting with the other coordinators and the managers here. I was helping out at our photobooth program, too. It’s a neat green screen app. And then I ate a banana during my break and now I’m talking to you!

That’s pretty good for three hours into a shift! It’s funny that you mention social media because I have to admit I Googled you before calling you and I couldn’t find a personal twitter account for you.

I really enjoy social media, we have a great team here – I’m pretty proud of our social media presence here. I don’t know whether I would have something that interesting to say on my own account.

Well, you could always include the tidbit about having eaten a banana. That’s not bad. Do you have any highlights or lowlights from this week?

Well right now it’s March Break so we’ve been really crazy busy. We’ve had hundreds and hundreds of kids through. We have an incredible range of programs going on. So that’s been a real highlight to see everyone coming through. In terms of lowlights, one of our 3D printers jammed. But I’m sure our crack IT team will have it running again in no time.

Switching gears, what is the last song you listened to?

I had the radio on and was listening to Q107 and one that has been going through my head for a while is “I Got You” by Split Enz. I’m showing my age here. It’s a really good song! The other one that’s been in my head is a music video I come back to a lot. It’s one that about a thousand musicians in Italy did where they covered “Learning to Fly” by the Foo Fighters in an effort to get them to perform.

Do you listen to any podcasts?

I do! I like The Nerdist. And LibraryLand by Scott Bonner from Ferguson Public Library and some other folks. We’re actually working on trying to create our own podcast here, so hopefully in the not too distant future we’ll sit down and do it.

I would definitely listen to that! Any upcoming PD or conferences you’re excited about?

We just had a poster session at OLA. And actually one of our staff members just returned from the Computers in Libraries conference in Washington, DC. She just loved it! She said it was fantastic.

Is there something underrated you can recommend us to watch on Netflix? I just tried to watch the revival of Full House but didn’t get very far.

I really like the Mr. Robot series. It’s about a computer hacker on the edge of good and bad. I tend to watch BBC documentaries.

What’s a good documentary we should watch?

That’s so much more intelligent than the last documentary I watched, which was a sensationalist documentary about the fattest man in the world who gets married.

Another good one is called Time Team, a British archaeology team who goes around the UK doing archaeology digs.

Are there any public library trends that you’re excited about or want to see end?

I’m really excited about our makerspace. We’ve been building programs around it. It’s something I’m learning on the job, as is probably the case for a lot of libraries. There’s a tradition of invention in Brantford. Alexander Graham Bell invented the telephone right here in Brantford. We have a quote of his on our wall where he said “Brantford became my thinking place.” It’s almost the 100 year anniversary. We’re hoping that the next Alexander Graham Bell will be inspired by some of the things that he or she experiences here. 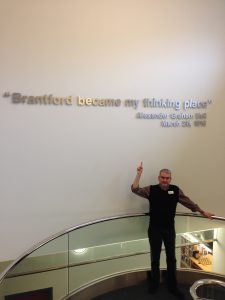