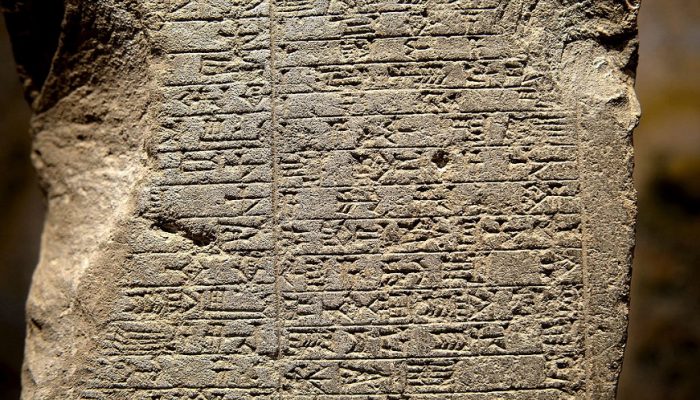 Last year we reported that University of Guelph students had staged a sit-in over the planned removal of the Library’s paper abstracts and indexes. Student protesters had disrupted other library users and staff for over a week before chaining themselves to the Library’s large collection of 1970s Biology Abstracts and Indexes. Reference and information literacy librarians were on the scene to reassure students that all of this information could be found in an equivalent online database, but the students could not be pacified.

Since that unfortunate incident, the Library has been in talks with the unnamed student group leading the protest and has explored several avenues for improving relations. One recent initiative that seems to be getting some traction is the Library’s Artisanal Cuneiform Experience workshops. The brainchild of an enterprising Ancient Near Eastern Studies Liaison Librarian, this initiative brings together community partners such as the Civic Museum and the local pottery club, and speaks to the student body’s appetite for local, DIY, organic and gluten-free reading experiences.

Cuneiform is a writing system of wedges engraved into soft clay to represent the ancient Sumerian tongue. Invented some 5,000 years ago on the banks of the Euphrates, the language reflects the concerns of the society in which it developed: its lexicon is limited to topics of food, agriculture, and domestic animals. Fortunately, these align well with the core academic strengths of the University of Guelph and the Library’s collection development strategy.

To introduce the student body to the neo-ancient art of artisanal cuneiform, each student is paired with an expert in ancient languages, as well as local crafts people who supply locally-sourced mud and sustainable, pesticide-free sticks. The Library has removed all the computers from the first floor and invested in heavy duty plastic drop sheets to avoid ruining the carpet. Students learn to carve boustrophedonal wedges into the clay, mimicking the writing method used by the ancients. At the end of each four-week workshop, most students will have created two tablets, one of which they donate to the Library’s institutional repository.

“I’ve brewed my own beer, milked my own goats, and crafted my own skin cream. This was a natural next step. I’m glad the University of Guelph Library has found a way to remain relevant,” quipped Jeremiah Atticus “Lentil” Gardiner, a student studying beekeeping and turfgrass management.  In a fascinating nexus between the ancient and the modern, Gardiner has even organized a makerspace where he and other artisanal cuneiform enthusiasts can replicate their favorite tablets using 3D printers.   “If the ancient Sumerians had had access to this technology, I imagine we’d all be writing in cuneiform today,” he added.

The initiative has not been without its challenges. In November, an agricultural economics graduate student chiseled the first chapter of his thesis onto a clay tablet and insisted his doctoral committee accept the work. Also, what started out as an innocent pun escalated to physical humour and forced the Library to post an official ban on students giving each other wedgies.