October 2017 marked the 100th anniversary of the Russian revolution which began a new stage in the development of librarianship by creating the objective prerequisites for free access to books, knowledge and information on behalf of the working class. Under these new economic and political conditions the traditional library had to be radically transformed. As Lenin stated: “Formerly the whole human intellect, all its genius, worked merely to supply some with all the good things of technology and culture while depriving others of the necessary education and self-development.”

Under socialism, the technological and cultural achievements became public property. Lenin viewed librarianship as an index to the cultural level of a country, and integral in the construction of socialism. This heritage formed the basis of the socialist library service. 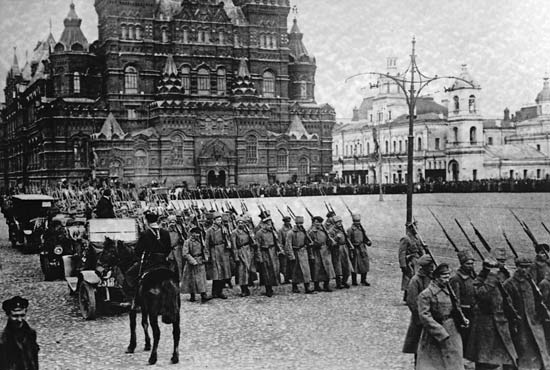 In conformity with the new historical conditions, Lenin determined the aims for libraries, as well as their function in raising the cultural and technical standards of the working class. Lenin emphasized that library development is closely associated with social conditions and the given historical situation: librarianship is a social phenomenon with a distinct class and party character.

In What can be done for public education? Lenin’s Marxist analysis of librarianship in pre-revolutionary Russia identified “hundreds of formalities and restrictions in the use of books.” For Lenin, the correct social purpose of libraries is “to make huge collections available not for professional associations of scientists, academic and other specialists, but for the masses, for the crowd, for the street”. The function of the public library is “not in the accumulation of books and MSS rarities but in widespread circulation among the ordinary people.”

Emphasizing the necessity of universal access to books, Lenin recognized the problem of accessibility as a social problem, writing that “the impact of education is measured by how many books are loaned and what facilities are offered to the population.” The function and position of Soviet libraries in public life as formulated by Lenin, developed alongside the actual tasks confronting library construction in the USSR, and some important theoretical conclusions emerged in the decades after his death:

The actual realization of these propositions was guaranteed by the state and Communist Party. The 1974 decree of the central committee of the CPSU, The increasing role of libraries in the communist education of the working people and in scientific and technological advance, emphasized the responsibility of libraries in a developed Socialist community. It affirmed that the library is an: “Ideological and scientific information institution organizing public books and is designed to assist in Communist education, the raising of cultural and professional standards, the mobilization of the masses for the solution of political, economic and cultural tasks through comprehensive assistance to readers, active reading advice, and the provision of bibliographical information”.

The Soviet Union recognized the importance of availability and library democratization in a world where millions lacked access to books. By the mid 1970’s, the USSR had 350,000 libraries with a book stock of 4 billion copies. The human population was 260 million.

All Soviet libraries were ‘public’ since there was no restriction on use, and the greatest acceleration of libraries and book stock took place in the rural areas, Socialist Republics, and numerous nationalities of the Soviet Union. The stress on services to these ethnic regions became a distinctive aspect of Soviet librarianship, by forging contacts through the library networks and consolidating the moral and political unity of the people. The spiritual and intellectual activity of the various nationalities was enriched by mutual introduction to the literature of their fellow nationals within the USSR. Moreover, the library service acted as a means of transmission, by which the classical and contemporary works of world literature reached ordinary readers via book exchange, international loans, and published translations.

In accordance with standards laid down at the national level, no library in the Soviet Union was situated more than 2-3 km from home. Literature and document collections were available through the interlibrary loan system, which ensured that the “widespread circulation of books” aimed at by Lenin was achieved. Full state support for libraries in the Soviet Union created a reliable base for their development, and provided the necessary precondition for a continuous rise in status and recognition of librarians.

The 1977 constitution on the 60th anniversary of the Revolution legally affirmed the status of libraries. Article 46 stated that “citizens of the USSR have the right to enjoy cultural benefits”, guaranteed in actual practice by the dissemination of public collections via the numerous educational bodies throughout the country. This Article highlighted the social significance of libraries throughout all the spiritual and material instruments of power of the Socialist state. Accordingly, phenomena such as ‘devaluation’ and ‘inflation’ that hindered library development in the Capitalist west were unheard of in the Soviet Union.

In conclusion, the Soviet conception of libraries was based on criteria that were humane, inspiring, and always combined with innovation and a respect for the progressive experience of other countries. The future Socialist society will inevitably require appropriate adaptations as experience dictates, as will books and other media, but whatever changes there may be, the importance of public libraries will only grow under Socialism. This was the fundamental tenet of Soviet library science, a pledge of unfailing solidarity with all progressive library workers abroad who labour in the name of peace, humanism, democracy, social progress, universal access to knowledge and information.

John Pateman is the CEO of the Thunder Bay Public Library. He is also the author of the Open for All? column in Open Shelf. He has co-authored this column with Joe Pateman. Joe is a PhD candidate studying politics at the University of Nottingham with a specific interest in Marxist political theory and international political economy.