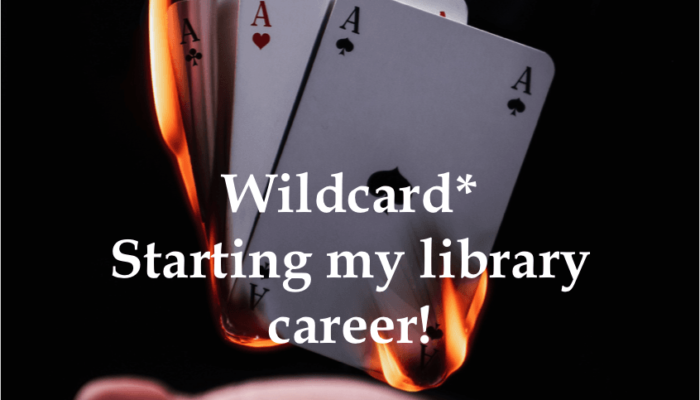 Graduating from library school is a significant accomplishment. So too is getting launched on one’s “brilliant career.” In Wildcard* Starting my library career! Rhea Smith, MLIS, shares her experiences of navigating the job market as a newly minted librarian.

The characters from the 1968 musical Hair send us a clear political message: My hair, your hair, our hair belongs to us alone. And yet in public spaces such as the workplace, our hair seems to belong to others. In this article, Rhea talks about the unique challenges she has as a woman of African descent, regarding how she wears her hair at work.

New job … new hairdo?
So I’m getting ready for a job interview and I want to look professional. Given that first impressions are formed based in part on physical appearance, I think carefully about the clothes I’m going to wear, the condition of my fingernails, and my hair. For many new library professionals, the decisions we make about these aspects of our appearance seem relatively straightforward. But as a woman of African descent, I know that these choices can be (and often are) highly politicized—particularly those related to hair. Instead of being seen as well-groomed, others can view our hairstyles as being “too Black” which can cause a lot of anxiety for women like me who value our work and want to do well in our role. It is a dreadful thought that someone could lose their employment because of the way they wear their hair. It might even seem absurd, but it is a reality that plagues persons with African textured hair, even those who work in libraries.

Media representations of Black hair over the past decade
I am glad that Ms. Celina Caesar-Chavannes, former member of Parliament for Whitby, ON, and a woman of colour who is also known for her “dope braids,” has been acclaimed a 2019 Woman of the Year by Chatelaine magazine. I read her article on Refinery29 following American actress and activist Gabrielle Union’s termination from a popular television show over concerns that Ms. Union’s hairstyles were “too Black” for work. I visited Ms. Caesar-Chavannes in Ottawa in December 2017 when I took my daughter for a tour of our nation’s capital. It was a grand experience except when we were denied entry to our reserved seats in the government members’ section of the viewing gallery because the guard ushered us into a packed space instead.

As a result, we almost missed the unexpected and thrilling moment when my daughter’s greeting card was being delivered to Prime Minister Justin Trudeau and he gave us a thumbs-up in response. I interpreted the guard’s decision as an act of microaggression as defined by Ms. Caesar-Chavannes, although I was not aware that she also experienced acts of racially based microaggressions on Parliament Hill.

I was as disappointed as Ms. Caesar-Chavannes, to hear of Gabrielle Union’s experiences at work because of all the strides that I have observed being made in the North American media towards the acceptance of African textured hair over the past decade.

In the summer of 2009, Chris Rock’s documentary Good hair was released. This film revealed how choosing a hairstyle can be a significant challenge for Black women as well as how human hair is collected and shipped to our local beauty supply stores, and it resonated with me. While doing my undergraduate degree at York University, I worked in the wig room at the beauty supply store near campus. I was surprised by the number of professional Black women who made up the store’s clientele. I saw that they chose to wear hair extensions to fit in visually at work. I understood their perspective because Black hair is very curly and so it is very time-consuming to straighten. Hair extensions can be much easier to maintain for some women.

If anyone wants proof that Black hair is high maintenance, then consider that singer Rihanna pays about $23,000 per week for hair care services. Although, in contrast, a century ago, a successful Black hair stylist would be happy to earn $23 per week (Byrd & Tharps, Hair story: Untangling the roots of Black hair in America, p. 79). 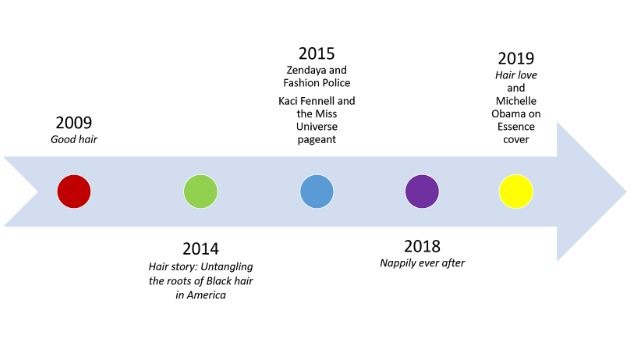 Then in 2015, a Fashion police host commented that biracial actress Zendaya probably smelled like patchouli oil or marijuana because she wore her hair in dreadlocks to a red-carpet event. The host later apologized after her remarks were called racist. That same year, Kaci Fennell famously did not win the Miss Universe pageant, while representing Jamaica. On reflection, in two videos, she reminded women everywhere that:

Being confidently beautiful is being comfortable in the skin you’re in and rocking whatever you see fit that makes you show you ….

The Netflix movie Nappily ever after was released in 2018. The film is based on the 2001 book by Trisha R. Thomas, a book which gave Black women the motivation to wear their hair confidently.

2019 was a watershed year. The Oscar-winning short film Hair love was released, and Michelle Obama, the former first lady of the United States of America, was photographed wearing her natural hair while on vacation. She had been photographed only with her “work hair” during the eight years that she served as the first Black first lady. Then Mrs. Obama decided to show her natural hair on the cover of Essence magazine. In July 2019, California became the first state in the U.S.A. to make it illegal to discriminate against a person for wearing their hair as it appears naturally, and by September 2019, more U.S. states were taking similar steps to improve their inclusivity in regards to ethnic hairstyles. 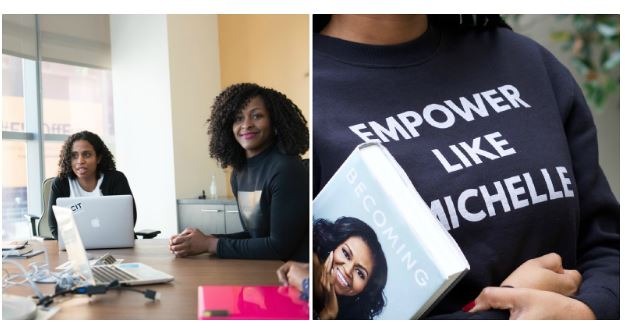 Agency, power and freedom: The right to choose our hairstyle(s)
Recently, I watched a movie called Rock n’ roll Christmas. The film features a teenager named Riley, and in one scene, Riley’s grandmother tells her that she looks just as beautiful without makeup. Then Riley says it is empowering to choose how she shows herself to the world. I loved that response. As a Black woman, I feel the same way about my hair. I was born with this hair type that allows me the flexibility to style it in unique ways, and I ask that people at work accept this aspect of my biology and respect my decisions about which hairstyles I think make me look beautiful. I understand the need for dress codes at work, and I know that these codes extend to hairstyles as well, but people express emotions, including confidence, through their hair, and who should decide which hairstyle gives a person the confidence they need at work?

Having the right to make these choices is about autonomy, self-agency, power and freedom, as Rep. Ayanna Pressley, the first Black congresswoman for Massachusetts, said when she revealed that she was bald as a result of alopecia. People of all ethnicities should be able to go to their workplaces, including libraries, and not be ostracized or criticized or have their employment terminated on the basis of hairstyle. Such is the freedom that the African-American slaves who settled in southern Ontario were hoping for.


Most interesting of all are the inhabitants … most of them were slaves who owned nothing, not even their children. Now they own themselves; they own homes and farms. They are enfranchised citizens of a government which protects their rights. They have the great essentials of human happiness, “something to love, something to do, and something to hope for.”
Dr. Samuel Gridley Howe (1801–1876) (Buxton Museum)

I am grateful that, as a Black woman living in Canada in the new millenium, at least in Ontario, my experiences have been mostly positive. There was one unpleasant incident when I was advised by a supervisor at a call centre where I was working that my head wrap did not fit in there. I explained to the manager that women in African cultures wore head wraps sometimes, but she insisted that “It is not considered cultural if you don’t wear it all the time.” Thankfully, Ontario implemented a three-year Anti-Racism Act in 2017 and a national anti-racism strategy was launched in 2018. Both initiatives are designed to engage citizens in thinking about how government legislation can help to end systemic discrimination against racialized Canadians, particularly persons who identify as Black or Indigenous. 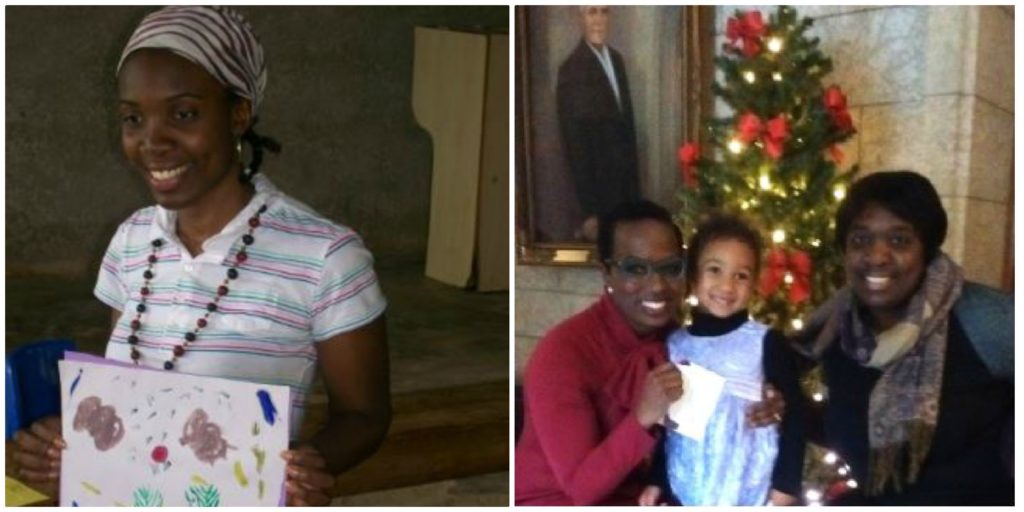 My hair in the library
I have successfully interviewed for library jobs while wearing my hair naturally, in braids, and in wigs, and I have worn my hair to work in these various styles, again mostly incident-free. Once, a patron caressed my natural hair because she was eager to learn how to style her biracial granddaughter’s hair. I gave her some advice as to where to look for more information about African textured-hair styling. One of my co-workers mentioned the inappropriateness of the patron’s actions and apologized to me after the patron left. However, I explained that I might have been the only Black female in that lady’s social sphere, so I chose to overlook her actions.

I have also felt encouraged that my hairstyles would be accepted in the public library workplace because I have seen other Black women wear their natural hair in public libraries. In particular, Tanya Sinclair, the former CEO of the Pickering Public Library (PPL), confidently wore her natural hair to work. Prime Minister Justin Trudeau visited the PPL last year and tweeted out a photo of him and Ms. Sinclair. Although the prime minister has since then come under scrutiny for wearing blackface, and rightfully so, a picture of him standing beside a Black female executive wearing a Black hairstyle at her place of work remains iconic to me and undoubtedly to other women of African descent. This picture confirms that our hair is acceptable for work in Canada.

New year, new decade, new levels of acceptance?
A new year, and a new decade, has started, and with new beginnings come new opportunities to grow personally and professionally. I encourage library staff and members of their communities to continue to assert that everyone fits in at a library—not just those with the right hair.

Rhea Smith graduated from the MLIS program at the University of Western Ontario in June, 2019. She has worked in government, academic, public and law libraries. She is a past Chair of the OLA’s Cultural Diversity & Inclusion Task Force. Rhea can be reached at rsmit273@uwo.ca and/or at linkedin.com/in/rhea-smith-61952525.

In endeavoring to to meet the needs of our communities, we as library staff have to ignite the sparks.