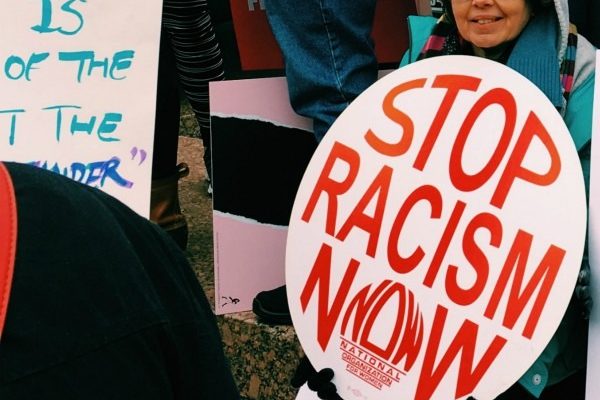 In this three-part series, Amber Matthews unpacks the backlash against anti-racism dialogue and unpacks the need for those of us who work in the library sector to think deeply about institutional biases. We must reflect on and think critically about embedded ideological barriers and what we must do to create significant structural change that, in turn, can make libraries truly welcoming and inclusive.

In Part I, Amber addresses the media response to conversations about white privilege that happened during Super Conference 2020 and addresses the need to acknowledge the systemic racism in public libraries. In Parts II and III, which will be published in May and June respectively, she will discuss the need to acknowledge racist thinking and how to engage in anti-racist praxis.

“How white is your collection?” is probably a fair question to ask most Canadian libraries.

Yet this, amongst other descriptions of sessions running at the Ontario Library Association’s (OLA) 2020 Super Conference, strangely found its way to reporter Sue-Ann Levy at the Toronto Sun. In a resulting op-ed entitled Librarians denounce white privilege, Levy lambasted OLA and its Super Conference attendees for being emblematic of the “white guilt and anti-white racism” plaguing Canadian public institutions. She went on to suggest, rightly so, that libraries are publicly funded and must be held accountable to their respective communities. Interestingly, though, her conception of a library, its workforce, and the Canadian taxpayers appears to be exclusively white and devoid of any responsibility to respond and attend to all community needs.

Levy noted that she was tipped off to this “extreme left, woke exercise” by an anonymous retired librarian, who was shocked by the trajectory of conversations at the OLA’s annual conference. While the anonymity of the whistle-blower begs its own set of questions, it’s worth ruminating on what about addressing the realities of colonialism and systemic racism is so threatening and problematic that it garnered such a response from someone deeply familiar with our work. Was it the presumption of ill intent, or label of wrongdoing? An inability to appreciate how white cultural normativity is and feels oppressive? A desire to hold onto the idea of the library as it was before wokeness and intersectionality turned our work on its head?

While uncomfortable and obviously distressing to some, these are important questions to ask. However, in having these conversations, we have to stay clear of false narratives that suggest our work must fall into paralyzing dichotomies. Acknowledging that colonialism and systemic racism exist and working towards developing more inclusive and welcoming practices doesn’t imply that our work is inherently bad. Public libraries are good places where a lot of good people do good work that benefits people and communities every day. At the same time, this fact doesn’t mean that we can’t also tacitly perpetuate racism in Canada. In effect, our work can feel and be oppressive to some, even if it doesn’t feel oppressive to us.

It’s also important to remember that we are not alone in asking these questions. Much to Levy’s chagrin, these conversations are happening throughout Canadian public institutions and services. Spurred on, in part by recent legislation, such as Ontario’s Anti-Racism Act and the federal government’s new Canada’s Anti-Racism Strategy 2019–2022, organizations are being called on to critically examine practices that are likely to affect racial groups differently. Increasingly, this examination is quickly becoming an essential organizational mandate across the country.

These institutional responses are a vital step in moving towards racial equity in Canada. Before we can get to the core of the issue and questions at stake, though, we need to concretely define what it is that we are talking about. Racism, and especially systemic racism, is a deeply interconnected social process that has effects on all it touches. Its most dangerous and insidious effects do not just manifest themselves in interpersonal relations. Rather, it is a mode of thought and practice that permeates institutional structures and that shows up, largely uninvited, in all aspects of our work and daily lives.

This circumstance doesn’t overshadow the fact that overt racism is also deeply harmful to individuals and communities. Rather, it aims to cast light on our power and ability to control the way in which public libraries either contribute to or work against the problems our communities are facing. Moreover, it underscores that the goal is not merely to change one’s thought processes or to work to improve the socio-economic, cultural, or political conditions of marginalized groups. Instead, we need to envision new spatial and material conceptions of the library as an inclusive repository of knowledge and culture, as well as a true commons and a host to the public.

Questions about racial equity in institutions are rarely personal, nor are they indictments that imply ill intent. The point is to examine how our actions and practices do or do not affect races differently and how we can remedy unequal power that manifests in an imbalance of services, representation, and voice for certain groups. The purpose is not to guilt or shame institutions or people. Rather, raising awareness of and inspiring dialogue on racial justice is both a reparative and an educational pursuit. It demonstrates to those groups that have suffered ill-treatment that we understand where gaps lie and that we are committed to doing better. It is an opportunity to build bridges and repair schisms with Indigenous, racialized, and other marginalized groups.

Amber Matthews is a Library and Information Science (LIS) doctoral student at Western University and holds a master’s degree in LIS. Her research examines systemic racism in public libraries and its impacts on racialized youth in Canada.