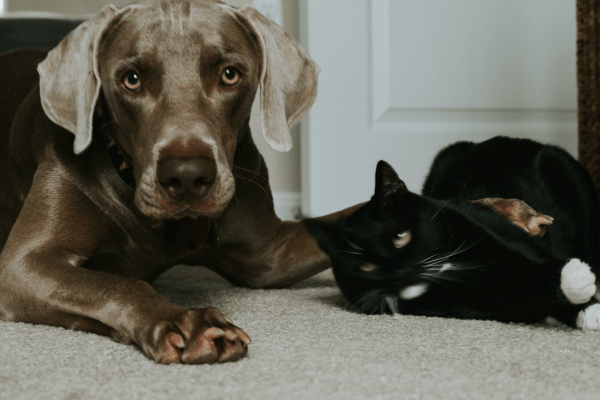 The psychological toll of social isolation can be challenging for all of us. Mental health issues are projected to rise during this time and may even extend beyond the pandemic. How can we cope with these sudden changes to the way of life we’ve always known?

From therapy animals to household pets to wildlife, many of us know firsthand the power that animals have to improve our mood and add healthy behaviours to our lives. It’s no wonder that during this crisis, animal shelters are seeing adoption rates increase.


However, you don’t need to adopt a pet; even spending time with animals in nature has been associated with stronger mental health. Here are a few stories about some of the animals that brighten our days and remind us of what really matters.

Do you have a story about an animal (or animals) that are bringing some stress relief into your life? If so, please share your experience and we’ll publish it next month.

My partner and I had all these grand plans of waiting to get a dog until we bought a house with a nice backyard.

In September of 2019, all those plans dissolved. My partner’s parents have a pair of Old English Sheepdogs that got a little too close one night. A litter of nine puppies later and it was pretty much decided for us that we were going to be getting a dog now.

The entire situation was a very unique experience—one that we couldn’t turn down. We had the chance to have a dog that we got to spend time with when he was no bigger than a gerbil. Not to mention he will be able to spend time with his mother and father, which, again, is not something that generally happens when you adopt an animal.

Before Ottawa was under quarantine, Monty had an intestinal parasite that meant he wasn’t allowed to be around dogs for two weeks. As soon as we finally received the okay from our vet to reintegrate Monty into his puppy class and let him play with other dogs again, the quarantine hit. He’s been isolated longer than most people have, so social distancing has been particularly painful for him.

Every walk with Monty becomes a game of “how many times can I break my dog’s heart?”; a game that no one wins. Monty wants everyone to pet him and he wants to play with every dog, but because of social distancing most people avoid him. It is sad when you have to stop your dog from playing with another dog.

It’s the little things Monty does that brings so much joy to my life. But, honestly, these moments happened before the quarantine. I think with how fast life can go sometimes, how constantly in motion we are in our everyday lives, it’s very easy to miss or overlook these little moments. Now that I’ve been gifted with some extra time I’ve been able to take a step back, breathe, and really relish in those fleeting moments of happiness from those small things: the victory trot of a freshly caught stick during a walk, the almost human sigh he makes after waking him from a nap, or even just working on the couch and having a napping dog on my lap.

Gee (short for Ginger) was a stray kitten that my daughter found on the street and we rescued. I’ve always been a dog person, so I didn’t really know what to do with a cat. I used to try to take him on walks with a leash and people would look at me and laugh. I’ve since learned that this isn’t normal cat protocol.

I don’t get depressed easily, but lately it’s been really hard. Especially over the holidays when I’m used to being with a group of people and being happy amongst my family. This Easter it was worse; I was just really sad. I tried to connect with people online and found that having chats with them helped, but it wasn’t the same as being face-to-face. Social distancing is just very isolating. It’s weird. I was hoping my daughter would be home but she’s working at the Ministry of Health in Ottawa right now—which is good. Certainly, it’s better than not doing anything.

I go for an hour-long walk every day to help with my sanity. If I didn’t have the walk to look forward to I would be losing it. But even going for a walk can be difficult! I love dogs, so when I go for a walk and I see a dog I have to fight my urge to pet them. It’s sad for me, and I’d like to think for the dog too. I would like to get out more, but I have to do work and the day seems to fly by even though there isn’t as much to do as there was before. However, if I was alone at home with no animals it would be an entirely different situation, I would have lost it week one of quarantine.

I am so thankful to have Gee, because without him life would be really lonely. He always wants to be by me. When he wants attention he will sit beside me and put his paw on me to get pets—he just wants to be loved. I can’t even go to the bathroom by myself without him wanting to be near. Just being loved unconditionally makes all the difference for me.

I’m in a unique position—I only had a cat when I was a kid, and then no pets at all until about a month ago! I moved into my boyfriend Duncan’s house during this year’s quarantine, and I’ve become enamoured with his two cats, Roo and Dart (short for D’Artagnan). Roo is seven years old, and was rescued from the side of the road as a kitten. Dart is two years old and was a surprise porch drop-off from Duncan’s cousin.

Roo and Dart have helped me so much during the quarantine; even though they don’t need to be walked, I’ve got someone to take care of (other than Duncan).  It’s nice to have a cat to curl up with and read a book, or to watch them do funny things like climb the bookshelf or chase a laser pointer. The amusement factor alone has helped me very much.

When I first came out here about a month ago, Roo and Dart weren’t huge fans of having someone around all the time—they wouldn’t really come around very often. Now that they’ve realized I’m here to stay and that I’ll let them sleep in the bed with us, they’ve warmed up to me. Duncan lets them out in the morning and they spend all day meowing at me to be let back in.

Alison, library technician, Toronto
Pet: None, but I love the neighbourhood squirrels

I’ve had pets my entire life. First a dog when I was a young girl, and then cats for 30 years after that. I had Sherlock (a cocker spaniel), as well as Tisha, Spike, and Moose (all cats). Moose was my most recent cat and around 14 years old when he ran away from home. He was getting old and I think he was also getting sick. I was a basket case when this happened, running around the neighbourhood yelling “Moose! Moose! Where are you?!” But to no avail. It’s been about four years since I last saw him and I just haven’t had it in me to get another pet. I don’t think I could take that hurt again.

But the neighbourhood squirrels are filling that gap . . . just a bit.

I must have started feeding the squirrels in my backyard about a year and a half ago. Before the squirrels would only come over during the morning around 9 a.m. but since I’ve been working from home the last little while, they are here around two or three times a day. They are timid enough that they don’t try to run into the house or anything. I just leave seeds on the step of my back porch and watch them break the shells and eat the nuts. If I’m not around and they want some seeds, they jump on the screen to call me over. It’s a lot more cute than it sounds.

I had a pregnant mom come by and I fed her all the time. She later came back with her babies and it was the cutest thing. Thanks to the squirrels, I now have a nice yard with sunflowers. I never planted any sunflowers, the squirrels did with the seeds I fed them.

It brings so much joy and adds to my day. It gives me something to look forward to. I stop everything when those squirrels come to the door. It’s like having a friend pop by say hello. Not getting to see my friends and family has been very difficult so having something as small as little furry backyard visitors certainly brightens the day. Don’t get me wrong, I don’t want them in the house, but they are so cute.

Justin Ball has many years of experience in the film industry working with The Mind Refinery, a Toronto based production company. He has written content for web-series, branded content, and short films. Some examples include the short film Inventing Time, the feature film Burning Daylight, and the web series Conversations for the End of the World. He has worked as an editor for novels and scripts for such writer’s as Raquel Dove.

When Justin is not reading, writing, or editing, he can be found listening to some music while he tends to his garden.
COVID-19healthmental health