In this two-part article, Andrew and Martha unpack the supposed abrogation of responsibility of the federal government to Indigenous communities. In this first installment, they dive into the question of governance and the tensions between the Indian Act and rights created under both the Constitution of Canada and the Canadian Charter of Rights and Freedoms.

“Canada has gradually ceded its oversight powers to band chiefs and councils, without checks and balances, or any semblance of accountability.”

Many of us may not have an extensive understanding of Indigenous-federal relations, so we might ask ourselves, “What is so problematic about a vocabulary of good governance?” We might also wonder where we would start to search if we wanted to find the kind of information that might provide a counterpoint to Francis’s idea that the Canadian federal government needs to take back its power from Indigenous communities.

In what follows, we sketch some key points that help frame the problem. We also offer some “information seeking” suggestions—ways of finding key documents that frame ideas about governance in the context of Indigenous-state relations.

Finally, we invite Kahente Horn-Miller into the conversation. Kahente is a leading Kanien’kehá:ka scholar who thinks deeply and critically about issues of governance.

In her recent opinion piece The Federal Government has Abrogated Its Responsibility to Hold First Nations Accountable, journalist Diane Francis argued that the federal government has violated its legal duty to hold First Nations band councils financially accountable, infringing the rights of band members. To construct this argument, Francis opens with the unsourced claim that First Nations “often do not” consult their constituents. As a result, First Nations governance is plagued by a lack of accountability and corruption and is therefore profoundly undemocratic. According to Francis, the root of this problem is twofold.

One, First Nations are incapable of independent governance; and two, the Trudeau government is derelict of its duty to hold them accountable. This combination of a lack of capacity and a lack of responsibility ultimately violates the rights of band members.

As with many simple statements about complex topics, there are both elements of truth as well as deeply problematic aspects to Francis’s opinion.

On the one hand, it is true that the Canadian federal government has a legally enforceable fiduciary obligation towards Indigenous peoples. This obligation emerges from the Indian Act of 1876 (“the Act”) , a piece of federal legislation that consolidated the relationship between the federal government and Indigenous peoples in Canada. This statute has been amended numerous times over the decades, but its principal role is to unilaterally define:

On the other hand, the Act’s comprehensive control of Indigenous life and identity in Canada is profoundly problematic. 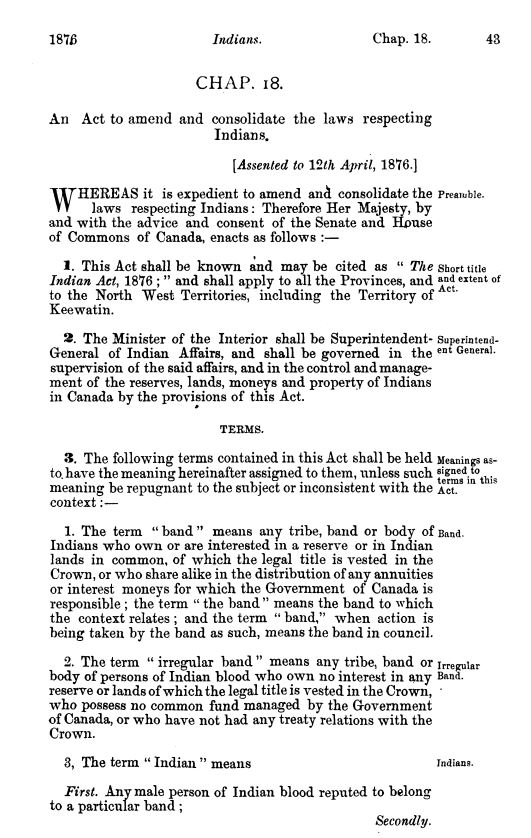 Wards of the state
This legislative control of Indigenous peoples in Canada makes “Indians” wards of the state who have been systematically oppressed. For example, in recent years numerous amendments have tried to resolve the Act’s gender discrimination, which defined many Indigenous women and their children as no longer “Indian”. Along similar lines, The Truth and Reconciliation Commission described the residential school systems, established under the auspices of this legislation with the intentions of eliminating Indigenous cultures and identities, as one that legitimized “cultural genocide”.

This legal framework is further solidified by the embedding of the Act in section 35 of the Canadian constitution and section 25 of the Charter of Rights and Freedoms.

Commitment to participation in constitutional conference

35.1 The government of Canada and the provincial governments are committed to the principle that, before any amendment is made to Class 24 of section 91 of the “Constitution Act, 1867”, to section 25 of this Act or to this Part,

Anishinaabe jurist John Borrows describes the Act’s enshrinement in these two key legal documents as  “a perverse colonial framework”. Similarly, Heidi Stark, an Anishinaabe legal theorist, notes that this legal “double jeopardy” perpetuates a colonial “logic of containment [that] operates as an extension of the epistemological and physical violence endemic to settler colonialism”.

Jody Wilson-Raybould, Canada’s first Indigenous Minister of Justice and Attorney General, believes that the cumulative effect of legislative control places the federal government in a “dilemma” that she calls “the tragedy of ‘wardship”.

Simultaneously, the colonial government has a legal obligation to act on behalf of its wards while also striving to dismantle racist and genocidal colonial structures of domination and exploitation. For Wilson-Raybould, this means “building strong and appropriate First Nations governments,” within what she calls “fiduciary gridlock”.

Information seeking: Finding relevant government documents
While many library staff are comfortable navigating the (sometimes) complicated world of government documents, some of us are not. For example, as an academic librarian, I (Martha) can find peer-reviewed journal articles quite easily. However, responsibility for government documents has traditionally been given to librarians and subject specialists who have specific expertise in this area. As a result, when I have been asked a reference question related to finding legislation, typically I have cheerfully and swiftly referred patrons to my government documents or legal librarian colleagues.

But what if someone has to or wants to try and “information seek” on their own?  Here is some strategies for finding the key legal documents to which Francis refers:

Step one: Finding the current versions of legislation
The Justice Canada laws site or CanLII (the Canadian Legal Information Institute) are open-access sites where it is relatively easy to do basic or advanced search laws by name, by jurisdiction, and/or by type.

As such, finding all four pieces of legislation can be done either in a library or from the comfort of one’s home device. However, finding the original version of a law that received approval (i.e., Royal Assent) in the 19th century can be a bit trickier. Particularly tricky if someone is interested not only in the legislation itself, but in the discussion and thinking that took place amongst law makers as they were considering a bill.

Using this two-pronged search strategy, I could follow the parliamentary discussions related to the Indian Act of 1876, that actually began on February 10, 1876 and culminated on April 12, 1876 with royal assent.

Connect and consult communities
Even with the legal documents in hand, anyone trying to make sense of Francis’s argument would also benefit from learning more about the issues from an Indigenous perspective. In general, respect and justice are important principles to follow when building relationships with Indigenous Peoples and communities.

In addition to building respectful connections with Indigenous communities according to community protocols and traditions, one could also try to connect with Indigenous scholars who might be willing to engage in conversations about these issues. Legal scholars Heidi Stark and John Borrows have already been mentioned and they have published on a range of topics. Granted, their publications may not be available through public libraries but, in many communities, patrons can work with the public library staff to try and access academic materials. For example, in Ottawa the Smart Card program makes it possible for the public to borrow books from local university libraries. In addition, there might be Indigenous scholars doing research and teaching at local institutions who might be willing to be consulted.

On the topic of traditional governance, Prof. Kahente Horn-Miller is actively writing about governance in her community of Kahnawake. As she states in the following short video, governance as traditionally defined by Indigenous Peoples is something “entirely different” from governance as defined in the Indian Act. These differences are significant and cannot be ignored. Prof. Horn-Miller is a teacher and researcher in the School of Indigenous and Canadian Studies at Carleton.

Martha Attridge Bufton (MA, MLIS, Graduate Certificate in TBDL) is the Open Shelf editor-in-chief and a member of Editors Canada. Martha is the Interdisciplinary Studies Librarian in Research Support Services at the Carleton University Library and supports faculty and students in the School of Indigenous and Canadian Studies. She can be reached at martha.attridgebufton [at] carleton.ca.