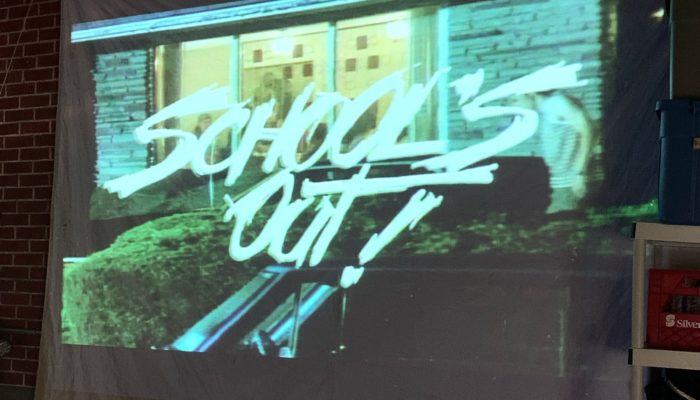 After the first, frigid weeks (then months) of the quarantine had passed, and what little novelty there was to be taken from isolation had faded, I found myself, as did most, missing our old world. Sourdough had been made, jigsaws completed, and my capacity to play Settlers of Catan online, which I once thought to be inexhaustible, had indeed reached its limit. I dreamed of movie matinees, board game afternoons, and karaoke nights. It was in the midst of these doldrums that I exhumed a long-buried idea: converting our sketchy garage (or “car hole”) [1] into a movie theatre. In particular, I wanted to share with others the unparalleled experience of being in a crowd (albeit a small one) and watching the best of the worst cinema humanity has to offer.

We all know that our libraries are not only collections, they are also spaces, programs, and experiences. And so it’s no surprise, in retrospect anyway, that I would turn to a movie theatre concept to combat what COVID had taken from me, both personally and professionally. I could create a programming experience inside the garage, using my personal collection of good-bad movies.

Good, bad, and everything in between
There is a certain art to the good-bad, and I have been puzzling out its subtleties my entire life. I have come to believe that a good-bad movie must be cheap and artless, but made with heart. Intentionally campy films such as Sharknado don’t count, nor do unfathomable works such as Jodorowsky’s The Holy Mountain, which scandalized the 1973 Cannes festival, and is so bizarre as to defy criticism. A good-bad must be fun to watch, but horrible in execution. Tommy Wiseau’s The Room is a good-bad, as is Ninja III: The Domination. [2] 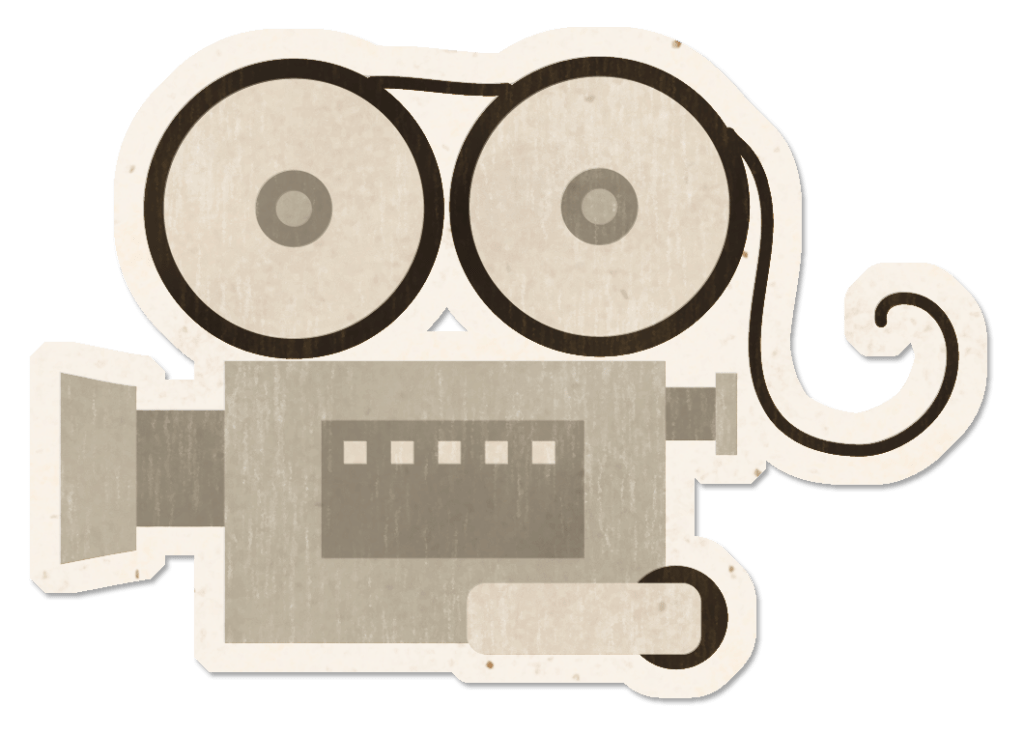 Most movies are bad-good, which is to say they are unenjoyable (bad) but competent (good). I think that Brad Pitt’s recent flop, Ad Astra, is bad-good, as the dull and nonsensical narrative wastes both the considerable talent and the money evidenced by the screen. BlacKKKlansman is good-good, as it is both enthralling and masterful.

Then there are the bad-bad movies, the real stinkers. 2015’s 50 Shades of Grey is bad-bad because it feels like an ordeal one must endure—the cinematic equivalent of a root canal—rather than a work of immersive art, and also because, for a story that is ostensibly about red-hot passion, it is exsanguinated by lifeless performances. [3]

Why do I love good-bad movies? Why do I have such affection for celluloid failure? I’m not sure. Is it because it is easier to like something bad, as doing so does not require taking an aesthetic stance? Is it the challenge of the garage sale hunter, always looking for the best amongst the worst? Perhaps a bit of each. Or perhaps it’s because, raised as I was on the edge of civilization (or so it felt at the time, being a half an hour north of Kingston, Ontario) my only view of a bigger world was through movies, especially the weird ones.

My history of bad cinema
Somewhere in my early childhood, my father fixed a spine-like antenna to the chimney on the east side of our house. Its prickly brain plucked signals from the ether, sending them down a twist of neural cords and into the back of our TV. Once the controlling dial was turned, the head of the antenna could be heard to rotate with a mechanical urn-urn-urn-urn-urn until it reached its target. Lo, what visions there were to behold! Set the dial here, and you had exotic locales such as Watertown, New York. Turn it there, and you had a faint but recognizable image from Ottawa. (Was that static snow, or just snow snow?) Thus, I was able to watch a young June Lockhart go slowly kill-crazy in She-Wolf of London, or catch any of the other silver age snoozables from Monster Movie Matinee. The American PBS station would show the occasional oddity—I remember watching The Bad seed there; that little tapdancing girl haunted my dreams.


By the early 1980’s, the addition of a VCR to our household had me rummaging through the grubbier options up for grabs at the local country store: the relentlessly moronic Morons from outer space, John “The Pope of Trash” Waters’ Polyester, and The Dunwich horror, a spectacularly unfaithful adaptation of the H.P. Lovecraft story of the same name.

Opening our own movie theatre
Our garage isn’t much to speak of. The concrete floor is corroded, it’s scorching in summer and freezing in winter, and the uneven walls have a Shirley Jacksonian lack of satisfying geometry. But it does have a front and back person door, a roof, electricity, and access to a basement washroom which had been modified for COVID. With a little creativity, and some technical MacGyvering, I knew I could make it work.

So, with camp chairs for seats, a bespeckled canvas drop cloth for a screen, a floor fan for HVAC, and fairy lights for mood and illumination, we launched the Car Hole Cinema. A Google doc gave people the lowdown on what to expect (including COVID safety measures) and the showings began. My program had patrons, collections, a facility . . . even policies and procedures!

The choice of film was determined by who was coming, what was available, and our own whims. School’s Out, the grand (?) finale of Generation X’s Degrassi saga, is a perennial favourite in our household. [4] Storylines are wrapped up, each of the main characters gets their time to shine, and whenever things get romantic, the melodramatic tunes of Larry Gowan set the mood.

Good-bad movies are cheap, artless, & made with heart.

Blade 2, a hyperkinetic, hyperbolic, leather-clad extravaganza, straddles the good-bad / good-good continuum. With a stellar cast (who knew that one of the guys from the pop duo Bros could act?) and Guillermo del Toro at the wheel, it has the DNA of a fine flick, but once the movie starts it’s impossible to take seriously. At one point the heroes hide from light itself by ducking underwater in a shallow pool. Hiding. From light. In a transparent medium.


For my money, the greatest of the good-bad horror movies is 1983’s Sleepaway camp, which we may have shown twice in 2020. With its wild shifts in tone and style, casting that seems like it was done on a dare, and its infamous, improbable, impossible ‘twist’ ending, this movie must be seen to be believed. When the great reveal is made at the end of The Sixth Sense, your mind scrambles backwards, looking for some way to prove it wrong—finding none, you have no choice but to marvel at the feat of cinematic prestidigitation. In contrast, upon watching Sleepaway Camp’s finale, any attempt to suss out the validity of the twist will quickly run into a wall of complete and utter narrative incompetence.


Season’s over
The final showing of the season, barring any surprise heat waves that give us another chance, was Scream 2, which was watched more for nostalgia’s sake than anything else. (That Laurie Metcalf, what a talent!) Afterwards, the Car Hole Cinema was packed up, hopefully to return in 2021. Libraries have returned to open hours, virtual programs have become a priority, and I no longer have the same amount of ambient energy I once did. I do hope to continue on, even if for no other reason than to laugh with others as we sit, six feet apart, but still together.

Post-season: Holiday horrors
The yuletide season is almost upon us and some folks will be spending that time catching up on movies. Now, if you want something that at least *tries* to convey some Christmas cheer, there are no end of nauseatingly saccharine Hallmark romances about successful young women from the city who visit the country, only to fall in love with an old flame / inn-haunting ghost / nutcracker doll brought to life. (No, I’m not making those up.)

My suggestion for a holiday romance is the ABC Family movie Holiday in handcuffs, which takes a bizarre swing at the lighter side of Stockholm Syndrome. It’s a low-budget, gender-swapped Beauty and the Beast as the always-lovable Melissa Joan Hart kidnaps super-stud Mario Lopez to be her Christmas date. “She’s holding him hostage, but he’s stealing her heart” is the tag-line you never knew you needed. [5] And, in case you’re wondering, the one-time She-wolf of London does indeed make an appearance as Grandma.


If romance isn’t your thing, then I highly recommend the most Canadian of Canadian horror films, Black Christmas. Filmed in Toronto during the icy winter of ‘73-’74, it stars baby-faced Olivia Hussey (known to many as Zefferelli’s Juliet) as a quiet sorority girl battling an increasingly-deranged stalker. It’s dark and grimy but there is fun to be had, especially for Canadian film and TV buffs. Visit the U of T campus! Try to take Andrea Martin seriously! Watch Margot Kidder drink a can of 50 inside a police station! Scratch your head as you try to remember where you’ve seen said police station’s desk sergeant! (It’s Doug McGrath from the canuxploitation classic, Goin’ Down the Road.) And check out my “Top 9” list of good-bad films in this issue of Open Shelf. [1] An old joke from The Simpsons. [2] The latter features, to my knowledge and everlasting hope, the only known use of V8 vegetable juice as a tool for seduction. Watch at your own risk. [3] The fact that it gets the nature of BDSM relationships so very, very wrong is just the unpleasant icing on a very flavourless cake. [4] The knowledge of the sad and lonely end of Neal Hope, aka Wheels, adds a bittersweet note to watching this now. [5] As of this writing, Holiday in Handcuffs is the most watched telecast in ABC Family history, proving once again that good-bad is in the eye of the beholder.