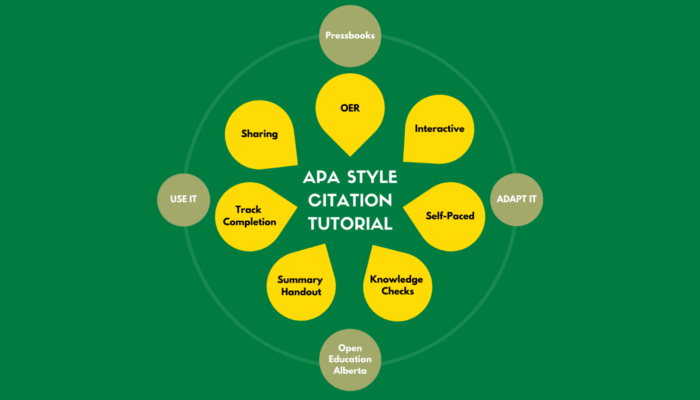 This two-part article introduces an APA Style citation tutorial created in Pressbooks, an open source publishing tool. Part I discusses this tutorial as a new Open Educational Resource (OER) available to use and adapt. Part II focuses on the importance of OERs, how Pressbooks was used to create the tutorial, as well as the relevance of this work across sectors.

The idea of sharing and adapting educational materials is not a new one. Teachers have been sharing their lesson plans, curricula and assignments with each other for a very long time. Open educational resources are “teaching, learning, and research resources that are free of cost and access barriers, and which also carry legal permission for open use” (SPARC). OERs provide opportunities for educators and librarians to develop and share materials for teaching and learning. By utilizing digital publishing platforms, OER can also help librarians and educators reimagine content like citation instruction.

Last year, a team at the University of Alberta (UAlberta) Library in Edmonton, Alberta decided to create an OER to support student learning and, in particular, students learning to use the American Psychological Association (APA) academic style. The APA Style Citation tutorial is currently in the pilot stage, but so far feedback has been positive and interest has been growing. The Pressbooks open source digital publishing platform, used to create the tutorial, allows a range of contributors to step into the world of online publishing.

What is the tutorial?
The APA Style Citation Tutorial is a 30-45 minute self-paced tutorial that is published as an OER by the University of Alberta Library. The structure and content of the tutorial was designed with Education students in mind, but this tutorial can be adapted and used by any institution or faculty.

How the tutorial came about
In September of 2019, staff at the UAlberta Library completed an assessment of its library instruction embedded in first-year Education courses. Several library staff teach approximately 20 face-to-face workshops in these courses annually.  Our analysis of student feedback revealed that 57/195 or 23% of respondents wanted more help with citing in APA Style. When we presented the findings to faculty, they echoed the need to address student anxiety about citations. We decided that the most scalable way to provide this targeted instruction to 20+ classes per year was to create an online tutorial.

Our timing worked out well as we identified the need for an APA tutorial just before the transition to the new version of the APA Style guide (the seventh edition was released in the fall of 2019). We tested a number of publishing platforms, including iSpring, Articulate and Pressbooks before deciding to use Pressbooks open source software. Pressbooks is a platform used within the UAlberta Library’s open education publishing program, which helps support the values of openness and sustainability in scholarly communication. Not only was the project unique in that we were adapting a longer modulular online course, but the APA tutorial is the first time the Open Education Alberta publishing service has been used for library teaching materials. 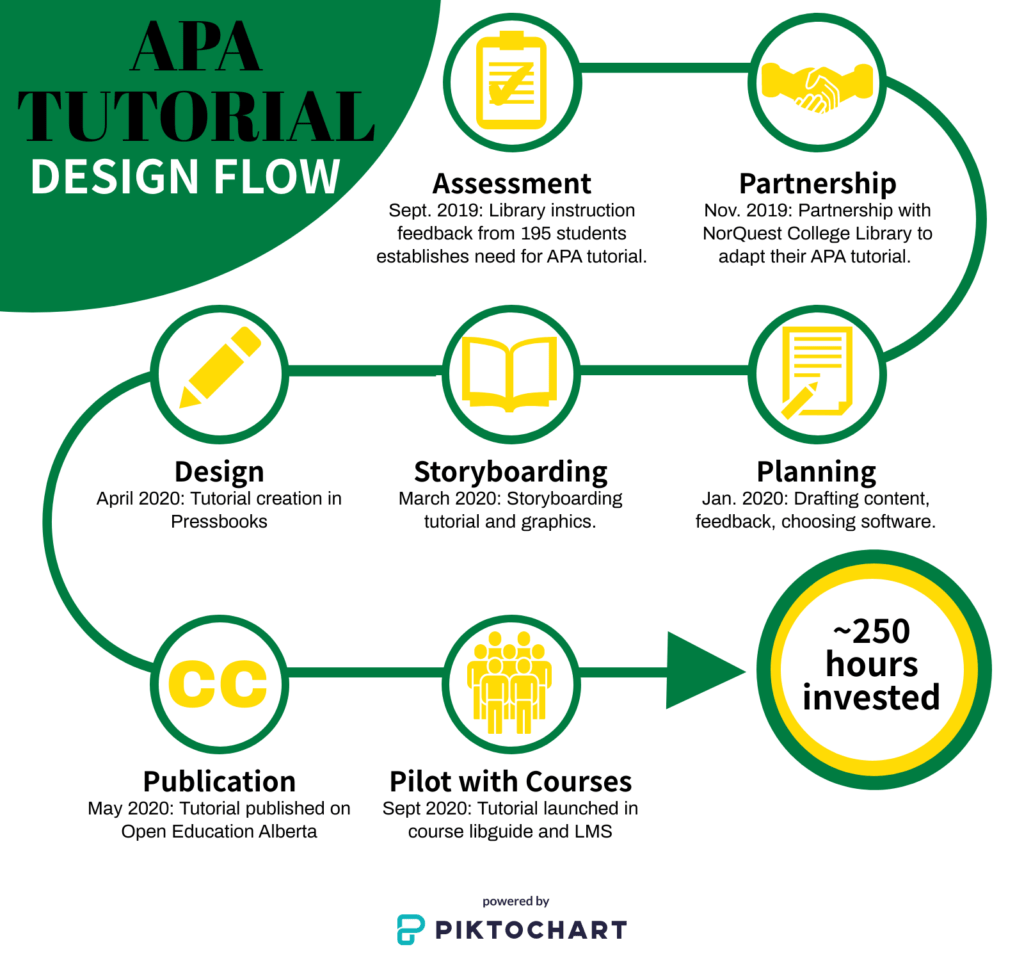 Releasing the tutorial
While the tutorial was initially created for our first-year undergraduate Education students, it is open and adaptable for anyone looking to learn about APA style and citations.

The tutorial was published in April 2020, which coincided with the transformational move to online learning that COVID-19 required. Locally, this time frame also aligned with significant budget cuts to education funding in Alberta. As of September 2020, the tutorial has had 350 views and these numbers are growing as the tutorial is now being integrated in fall courses. Faculty also love the tutorial. As one professor shared,

“As a librarian and a faculty member, I am so pleased to see this new Open Educational Resource (OER) created by the UofA libraries to support undergraduate education students in learning the “ins and outs” of APA (7th Edition).  For those new to style manuals and citation guides, the Publication Manual of the American Psychological Association can seem overwhelming.  Most students will never need to know all the details contained in the manual and really just need to have a basic understanding of why we use citation guides, how to cite sources in the text of an essay or paper, and how to create reference lists that follow the APA rules. This OER does exactly that. It is a clear and concise introduction to the latest edition of the manual.”

Our team is embracing the open education values of adaptation and adoption with the production and use of this tutorial! We hope that other library educators will use and modify the resource to fit their pedagogical needs. On our campus, there are plans for adapting the resource for a graduate Education student audience, and for translating the resource to be used in French-speaking courses.

We hope to start a conversation with other library staff and educators who have ideas for how they may use this resource. And we would love to hear how other library staff have used publishing platforms—such as  Pressbooks or another tool—either through the comments box below or via email.

The education and support provided by library staff is critical to student success. Some graduates do not always gain the research skills they hope to acquire during their undergraduate programs, according to a recent study from four Ontario university scholars. Open educational resources, such as this tutorial, could be used effectively to support student learning and enable library educators to make their educational resources more widely available.

Access the APA tutorial and the APA overview infographic.

Sarah Adams is currently looking for new opportunities, and previously worked as a Sessional Librarian at the University of Alberta with a specialization in Education. (sadams2@ualberta.ca)

Michelle Brailey is a Digital Initiatives Projects Librarian. She supports services for open educational resources at the University of Alberta Library. (brailey@ualberta.ca)

Alissa Droog is the Education & Social Sciences Librarian at Northern Illinois University, and previously worked as the Digital Literacies Resident Librarian at the University of Alberta. (adroog@niu.edu)

Debbie Feisst is a librarian at the University of Alberta with a specialization in Education & Humanities.  (debbie.feisst@ualberta.ca).