Sean and I work at the same institution, but located at different campuses we’d hardly ever had a chance to talk, so I called him on his day off for this interview.

I know you’re an archivist, but what do you do on a day-to-day basis?

It’s my job to identify, preserve, and make available for use records of enduring value at Seneca. I acquire inactive records from internal departments and offices across the College, as well as from external donors who have a close affiliation with the College. Once the records are in the custody of the Archives, I spend the bulk of my time arranging, describing, and making the records available to staff, students, and external researchers.

When you say you take in inactive records, what formats are these in?

Records come in many different formats. They can be textual, graphic, cartographic, architectural, moving images, sound recordings, electronic records, artifacts, and more. I do an appraisal of all record formats to determine their archival value, that is, the ongoing administrative, legal, fiscal, evidential, or historical value that they contain.

What can records be?

A record is, by definition, any recorded information created and set aside because it is recognized as having further value for action or reference. Records come in many shapes and forms. They are evidence of the functions and responsibilities of their creator.

For example, I recently took in a large collection of photographs produced by a now-defunct department at Seneca called the Department of Media Production. This was an important department that operated for almost 40 years at the College! This department produced thousands of graphic records (negatives, transparencies, prints, contact sheets) from 1967 to 2002.

Do you like looking through all these records? I’m kind of a snoop, so I imagine it’d be fun to be able to look through everything. Or is there just so much that it becomes not fun at all?

I love looking through the College’s records, but as you would imagine, you can’t examine everything in detail. One of the best parts of my job is getting to see a lot of the College’s nearly 50-year history. This includes buildings that are now gone, past events, former staff and students, and other information that I don’t think many people are aware of. It’s very exciting and rewarding bringing this material to light.

It’s kind of like being a postman delivering post cards. I’d think that’d be fun to read everyone’s postcards, but they have so many, they can’t read everything. So in a sense, you are the postman! Have you always wanted to be an archivist?

I haven’t always wanted to be an archivist. Like many archivists I know, an interest in the profession came late. I did an undergraduate degree in history at the University of Western Ontario. When it came time for grad school, I started to explore options related to the field of history, including work in libraries and museums. I liked the idea of pursuing work in archives because it allowed me the opportunity to handle primary source records and learn their stories, which I love. I’m very glad I chose this career path.

What is it like to work with a bunch of library people in your job?

I love it! My coworkers are wonderful. I’m learning a lot about academic libraries at Seneca, including the unique and diverse role our librarians and technicians play at the College. I’m working very closely with Seneca’s metadata librarian, Lydia [Tsai]. Digital preservation and metadata are important elements of both of our jobs.

Do you feel part of the team or do you feel like an outsider, working in a library?

I definitely feel like part of the team. Libraries and archives have always been very closely linked. Archives were traditionally nested in libraries throughout Canada and the United States, largely up until the 20th century, when librarians and historians realized that archival material needed to be understood according to its provenance, as opposed to by its subject, as is the case with books in libraries. Librarians and archivists are pals!

If your family members had to describe your job, what would they say? For example, my dad knows I’m a librarian, and if asked, he may say, “I think there’s books involved?”

I’m still not sure my family fully understands what I do. They probably think I’m a bit of a historian or a file clerk. From talking to other archivists, this is fairly common. Many archivists will, for better or worse, just tell people they are librarians to move along the conversation and avoid confusing people. I think it’s important, though, that people understand what we do and that archives exist to serve a diverse range of communities. Archivists have a professional responsibility to educate people on what they do. 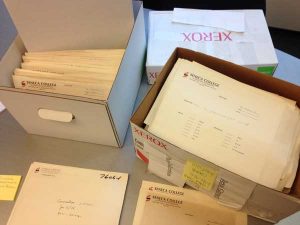 Are there are stereotypes or myths about being an archivist?

The public often perceives archives as inaccessible. Many people incorrectly believe that they can’t touch anything. In reality, most archives are open to the public. Unless the records are restricted due to donor requests, legal reasons, or are very fragile or damaged, you can handle them.

Another common misconception is that archivists are always handling very old things, covered in several inches of dust. This often isn’t true, especially in a country like Canada, where most of our records were created relatively recently, in the 19th and 20th centuries. European archivists, on the other hand, sometimes do handle records that are thousands of years old and maybe a little dusty.

Do the gloves you have to wear to touch archival material look like magician gloves?

I’ve never considered it, but yes, they do! I have a stack of them on my desk. I usually wear one white glove, which makes me feel a lot like Michael Jackson [laughs].

What’s the first thing you do in the morning?

I get up and feed my two cats, who are usually begging at my bedroom door for food and attention. In fact, one of them is begging for attention right now! You can probably hear her meowing.

After appeasing the cats, I usually do a social media post for the Association of Canadian Archivists (ACA). I manage the Facebook and Twitter accounts for the group.

Let’s bookend our day with the archivist, what’s the last thing you do before bed?

I check my email and make a list of priorities for the next day’s work.

You’re so dedicated that that’s on your mind before bed!

Much to the chagrin of my girlfriend.

Are you reading anything right now?

The last thing I read was How Music Works by David Byrne, former lead singer of Talking Heads. It’s really good. It’s about how people experience music in different spaces.

My last question is very important. What is it like to have the same name as Sean Hayes, the actor from Will & Grace?

It doesn’t come up as much as you’d think! But when it does, people get very excited.