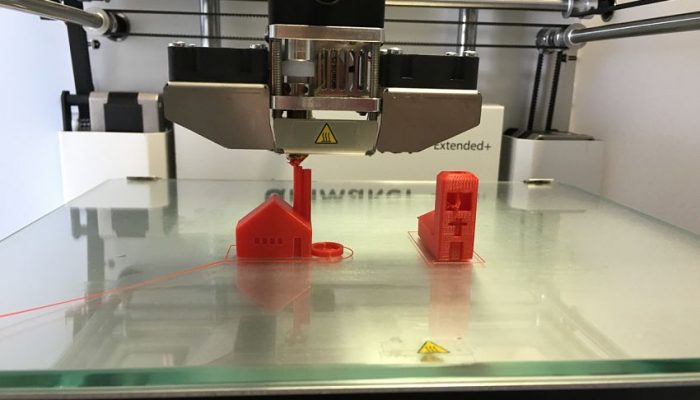 When the St. Thomas Public Library started investigating 3D printers as a new service several years ago, one of the frequent responses I would hear was, “Aren’t you afraid people will 3D print guns at the library?” I can tell you that this was not something I was worried about happening at all. Functional 3D design takes time, dedication and finesse. Besides, our printers were slow, had small print plates (6 inches), and printed only in brightly colored plastic. The idea of someone spending over 50 hours to 3D print a bright orange handgun in multiple pieces was ludicrous to me.

Fortunately, my gut was right.

Although we’ve had our 3D printers for over three years, we haven’t had to deal with any serious incidents related to the printing of items such as firearms. That’s not to say that we haven’t had any incidents at all—we have had two (almost three) instances where we have not released an object because it was prohibited under our 3D printer policy. While 99.9% of our 3D printer experiences have been positive, I don’t think we should shy away from those slightly more challenging and uncomfortable experiences, such as tackling the issue of printing weapons.

So let’s talk about them!

The first time we ran into the issue of printing prohibited items was when a teenager printed a 3″ knife (basically a replacement piece for a switchblade). Sure it was bright green, but it

was quite sharp and could probably inflict a solid puncture if handled with force. When the teen came by to pick up and pay for his print, I had to tell him that  we were not going to give it to him because we defined it as a weapon. We made sure to tell him that he was not in trouble and could try the printer again to make something else but that the printing of weapons in the library was not allowed. He took the news well and left.

Imagine my surprise when one of his parents called the next day and asked if it would be OK for them to pick up the 3D printed object, since we wouldn’t give it to their teen. We had to explain that the issue was not with the child’s age, but rather with the item itself, and that we weren’t able to give the knife to an adult either. Fortunately, the parent understood and didn’t push the matter further. Our policy at the time said that all 3D prints could be “vetoed” at the discretion of library staff, although it did not specifically state that weapons were prohibited. We made sure to update the policy quickly to incorporate the prohibition of printing weapons.

The second time we experienced 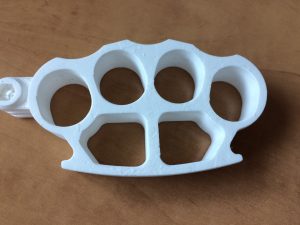 a challenging 3D printer issue, someone printed a pair of white plastic “brass” knuckles. Because our 3D printer policy had been updated to reflect our stance on weapons, we had a leg to stand on. We did have a hard time deciding whether plastic knuckles could be defined as a weapon, but in the end we decided that they were and wouldn’t allow the person to take them home. Once again, we made it clear that the patron wasn’t in trouble for making the print, and although the decision was disappointing, the patron understood.

The third (and final) time we had a concern was when a patron printed an actual gun barrel. The piece was quite large (maybe 6″ high) and staff recognized clearly what it was. So when the patron come by to pick it up, we struck up a conversation about the piece, what it was, and why they made it. The patron explained that it was indeed the barrel of a gun— for their broken Nerf gun! The patron had even brought in the plastic toy so we could see where this replacement part fit. After this quick chat, we were comfortable placing this object firmly in the “not a weapon” category. We let the patron pay for the object and take it home.

I believe that there are several good takeaways from these experiences:

Has your library run into any issues like this? What’s the weirdest thing that’s been 3D printed at your library? Please let me know—I’d love to hear your stories!

Sarah Macintyre, Manager, Access Services, St. Thomas Public Library, oversees many new digital initiatives, including the launch of Creators’ Corner services. She can be reached at smacintyre [at] stthomaspubliclibrary.ca